Grads who are off to college playing baseball are as follows:

Cards finish a successful season on the field with 3 tournament victories having raised the championship trophies at the Peter Devries in Edmonton, the Keith Sell in Helena, and the 1st Annual Jr. Dawgs invitational in Okotoks.   Cards also finished runner up in the Nationals Qualifier Championship week-end.  Well done men.

July 6, 2008: Cards win the 13th Annual Keith Sell Invitational championship by defeating the Butte Miners 5-0 in the final behind the 2 hit shutout by T.Grimm.  Grimm was also selected the tournament MVP.  B.Dawidowski with a massive solo homer and a single to drive in 2 runs.  E.Olsen and J.Ziegler with 2 hits each.

July 5, 2008: Cards defeat Idaho Falls Russets in an exciting semi-final game 16-10. S.Inch picks up the victory on the mound with J.Ziegler striking out 3 of 4 batters he faced for the save. C.Leflar sets a Cardinals team record with 6 RBI in the game with 4 singles. J.Ziegler scored 4 runs, E.Olsen and J.Greiner with 3 runs scored each. Opposing coach was former Edmonton Trapper Tyrone Horne. Interesting trivia that Coach Horne hit for the home run cycle!! Solo, two run, three run, and grand slam homer in the same game.

July 4, 2008: Cards open the game with an offence not seen in recent Cardinals history as they pound the Helena Senators ace for 9 runs in 2 innings and out last 2 rain delays for a 12-7 victory. A.Mirasty gave the team a quality start on the mound and the offence has 15 hits. 3 hits each by T.Muhlethaler, J.Greiner, and B.Dawidowski. 2 hits each by S.Inch and N.Winter.

July 4, 2008: Cards boot the ball around but with a Roy Halliday like effort on the mound from J.Greiner overcome the errors and come back to defeat the Regina Dodgers 12-5. N.Witsken was a blocking machine behind the dish and the offence pounded out 12 hits.

July 3, 2008: Cards open the Keith Sell tournament in Helena with a 12-8 victory over Casper Hurricanes. M.Rude and C.Ohara combine for the win and the save on the mound. E.Olsen with a triple, 2 doubles, a single and 3 runs scored ignited the offence. J.Greiner with a 2 RBI double and a 3 run home run were also high-lights of the 12 hit attack. N.Winter and C.Leflar with 2 hits each.

July 1, 2008: No fire works at this game but Cards play a solid all around game to defeat Norwest leaders St.Albert 5-0. T.Grimm goes six and 2/3 with M.Rude picking up the final out on the mound. Heads up baserunning by C.Leflar led to the first run. Rbi singles in the 3rd by Leflar and Dawidowski were enough runs for Grimm on this day.

June 25, 2008: S.Inch outduels J.Harasymchuk as Cards 1 win one nothing over Cards 2. Cards 1 execute a double steal by C.O'Hara and N.Winter to score the only run of the game.

June 23, 2008: Thanks to the many parents and volunteers from the Cardinals program who gave their time so the players could play. Without you there was no tournament!

June 22, 2008: Who said baseball isn't a contact sport? Multiple collisions on the basepaths with 3 players leaving the final game due to injury. Cards repeat as Peter Devries Classic champions with a 10-0 victory over Calgary Cubs at Telus Field Sunday. Calgary had defeated St Albert Cardinals 3-2 in the other semi final Sunday. C.O'Hara goes the distance on the mound for the victory for the Cards and picks up player of the game honors.

June 22, 2008: Cards win the semi-final 12-5 over the Red Deer Braves. M.Rude picked up the victory on the mound tossing a complete game. J.Greiner with 3 hits and 3 runs scored is awarded the player of the game award. T.Grimm and N.Witsken with 3 RBI each contributed to the team effort at the plate.

June 21, 2008: Cards win 2 on Saturday 5-2 over Calgary Cubs and a 3-2 7th inning walk off over Sherwood Park Athletics to advance to the semi-finals of the Peter Devries Classic. Two strong outings on the mound by T.Grimm in game 1 and C.Leflar in game 2. A lot of nice defensive plays and clutch hits. T.Grimm gets player of the game in game 1 throwing a complete game against Calgary. J.Unger is player of the game his walk off single and 2 walks in game 2. Honorable mention to B.Dawidowski for his 2 RBI double.

June 19, 2008: Spruce Grove Sox rally late to defeat the Cards 5-4 in game 1 of Peter Devries tournament. J. Greiner with a strong outing on the mound. J.Ziegler with 3 singles gets player of the game.

June 17, 2008: Weather takes another game from the schedule as massive rain in St.Albert washes out the game.

June 13, 2008: Did you know that 2 former Edmonton Cardinals, David Cooper and Mike Kicia, were members of the 2008 NCAA Division II National Baseball Championship team from Mount Olive Community College! And yet another Cardinals alumni, Thomas Lees, was a member of the 2008 NAIA Worlds Series champions, from Lewis-Clark State College!

June 4, 2008: Cards score in 5 of 7 innings as they take the first meeting of the year against the Spruce Grove Sox 10-3. C.Leflar picks up the win on the mound with T.Grimm closing the game. E.Olsen with 2 singles and a double and 3 runs scored, J.Unger scored 3 runs, and B.Dawidowski with 2 singles, 2 RBI, and 2 runs scored sparked the offence.

June 1, 2008: Cards sweep a double header from Calgary Cubs 16-6 and 10-2. J.Greiner and A.Mirasty combine for the victory in game 1. The Cards welcome S.Inch back from Vauxhall Academy this week-end and he combines with C.O'Hara on the mound for the victory in game 2. A lot of offence but B.Dawidowski with 2 bases loaded triples and N.Witsken with a booming 3 RBI double had key hits. E.Olsen, S.Inch, and T.Muhlethaler had 3 hits each. N.Witsken collected 4 singles and 1 double.

May 31, 2008: Cards sweep tough double header from a scrappy Okotoks Red with a pair of 4-2 victories. T.Grimm and J.Ziegler combine for the victory in game 1 and M.Rude tosses a complete game in game 2.

May 14th, 2008: Cards edge Sherwood Park 11-8 on a sunny evening at Centennial Park. Cards bats exploded for 6 runs in the top of the 4th to go ahead 6-4 and then added 5 more in the 6th. E.Olsen reached base 5 times on 2 singles and 3 hit by pitches. B.Dawidowski with 3 hits, J.Greiner and N.Witsken with 2 hits each.

May 11th, 2008: Cards sweep a double header from Okotoks Black 7-6 and 7-4. A couple of defensive double plays held off rallies by Okotoks. In game 1 N.Winter drove in 3 runs with 2 doubles and B.Dawidowski hit a solo homer. M.Rude and C.Leflar with 2 runs scored each. In game 2 J.Greiner had 2 singles. Cards batters drew 12 free passes. In both games the pitching staff battled against a Black team that can swing the stick.

May 9th, 2008: Cards defeat Sherwood Park 9-2 behind the 6 hit complete game by M.Rude. Cards offence score their first 4 runs on 9 walks and 2 hit batters. N.Winter and M.Anderson with 2 RBI each.

May 4th, 2008: Cards split a double header Sunday with Red Deer Braves losing a pitching duel 1-0 and taking the 2nd game 9-2. T.Grimm gets a no decision in game one. J.Greiner picked up the win in game 2. Doubles with N.Witsken, J.Unger, and N.Winter highlighted the offence in game 2.

May 3rd, 2008: Cards split season opening series with Westlock Legionaires taking the first game 9-3 and dropping the 2nd 6-3. M.Rude and N.Winter combine on a 4 hitter for the win. B.Dawidowski with a double and 3 run homer keyed the offence.

April 19, 20, 2008: Vauxhall / PBA jv exh. games cancelled due to poor weather. We will be back outside as soon as the weather permits.


August 13th, 2007: Congratulations to Tom Grimm who will join St.Albert for Western Canadians in BC.

August 13th, 2007: Congratulations to Nicole Luchanski who was a member of the silver medalists from Team Alberta at the Canadian Senior Women's Championships in Quebec.

August 5th, 2007: Cards waste a solid pitching performance by Myles Shaw as they are shutout 1-0 by St Albert.

August 4th, 2007: Best of luck to Nicole Luchanski as she leaves for Team Alberta and then Team Canada ladies camp.

August 2nd, 2007: Best of luck to Jarvis Greiner and Steven Inch as they leave for Canada Cup with Team Alberta.

July 1st, 2007: Cards climb back on the bus after dropping Calgary Cubs 13-3 in final game of Keith Sell tourney. M.Cala with single, double, triple and 4 RBI to lead the offence. S.Inch chips in with 3 hits. J.Greiner hits his first homer of the season.

June 29, 2007: Cards lose 11 inning marthon 12-11 to Saskatoon Sun Devils in a mistake filled game. D.Ziegler, M.Rude, S.Inch with 3 hits each in the loss. In the 2nd game of the day T.Meyer struggled with his control as the Cards drop their 2nd game of the week-end 14-4 to Helena Senators. N.Luchanski with 2 hits in the loss.

June 28, 2007: Cards open the Keith Sell tournament in Helena, Montana with a 12-1 victory over the Casper Wyoming Oilers. T.Grimm goes the distance on the mound. D.Ziegler, B.Langley, and J.Greiner with 3 hits each. N.Luchanski scores 3 runs.

June 24, 2007: Cards win 4th annual Peter Devries Championship. Thanks to our volunteers and umpires and especially to all those family, friends, players, and teams who worked on the 3 fields Saturday morning to get them playable.

June 23, 2007: Cards defeat Great Falls Electrics 6-0 in game 3 of Peter Devries. S.Jones goes the distance on the mound and his team-mates supply 11 hits with the bats.

June 23, 2007: After hours of field work preparing the field from the Friday night rain the Cards defeat the Calgary Cubs 11-0. C.Shaw throws a 5 inning no-hitter to win game MVP award.

June 14, 2007:
Many thanks to Kerry Meyer for his generous donation to the team.

June 12, 2007:
Congratulations to Jarvis Greiner and Steven Inch who have been selected to attend the final Team Alberta tryout camp in Lethbridge.

June 3, 2007: Cards drop their final game of the week-end 3-2 to St.Albert wasting an outstanding pitching performance by M.Shaw who strikes out 9 hitters through 4 innings of work. E.Olsen with a triple and 2 singles to lead the offence.

May 28, 2007:
Cards finish the Tom Taleff tournament with a 5-1 victory over Gallitan Valley Outlaws. C.Shaw and D.Boyer combine for the victory. Congratulations to M.Shaw and J.Greiner for picking up tournament All Star awards.

May 27, 2007:
S.Inch/T.Grimm combine to lead the team over Belgrade Bandits 14-5. The entire team contributed to the offence with good plate discipline and offensive execution.

May 27, 2007: Cards drop first game of Tom Taleff 3-1 to Vauxhall Academy Jets. Game was dominated by good pitching for both teams. All 4 runs in the game were unearned.

May 20, 2007: Cards defeat Kamloops Riverdogs 6-1 in game 4 of Matt Kroll. Solid pitching by M.Shaw and S.Jones. M.Rude and S.Inch led the way with 2 hits each. T.Meyer delivered key double to drive in runs early. Mondays playoff game was cancelled due to wet field conditions.

May 18, 2007: Aluminum wins out over wood as Cards drop opener of Matt Kroll to Calgary Longhorns 6-3 in a well played game.

May 13, 2007: Cards sweep Mother's Day double header from an up and coming Okotoks Red team.

Apr 29, 2007: Combined roster exhibition games against Vauxhall Academy over the week-end. S.Inch, C.OHara, and M.Rude combined on the 3-0 shutout in game 2 to go with 3 losses.

Apr 15, 2007: Jon Glover had surgery on his broken ankle and will likely be gone for the season.

April 2007: Congratulations to Steven Inch who attended the Junior Mizuno Elite Baseball Camp at the Sky Dome in Toronto.

Fall 2006: Congratulations to Nicole Luchanski who played for Team Canada at the 2006 World Women's Championships.

Fall 2006: Congratulations to Andrew Grafton who was named 2006 Baseball Alberta Midget Performance Player of the Year. 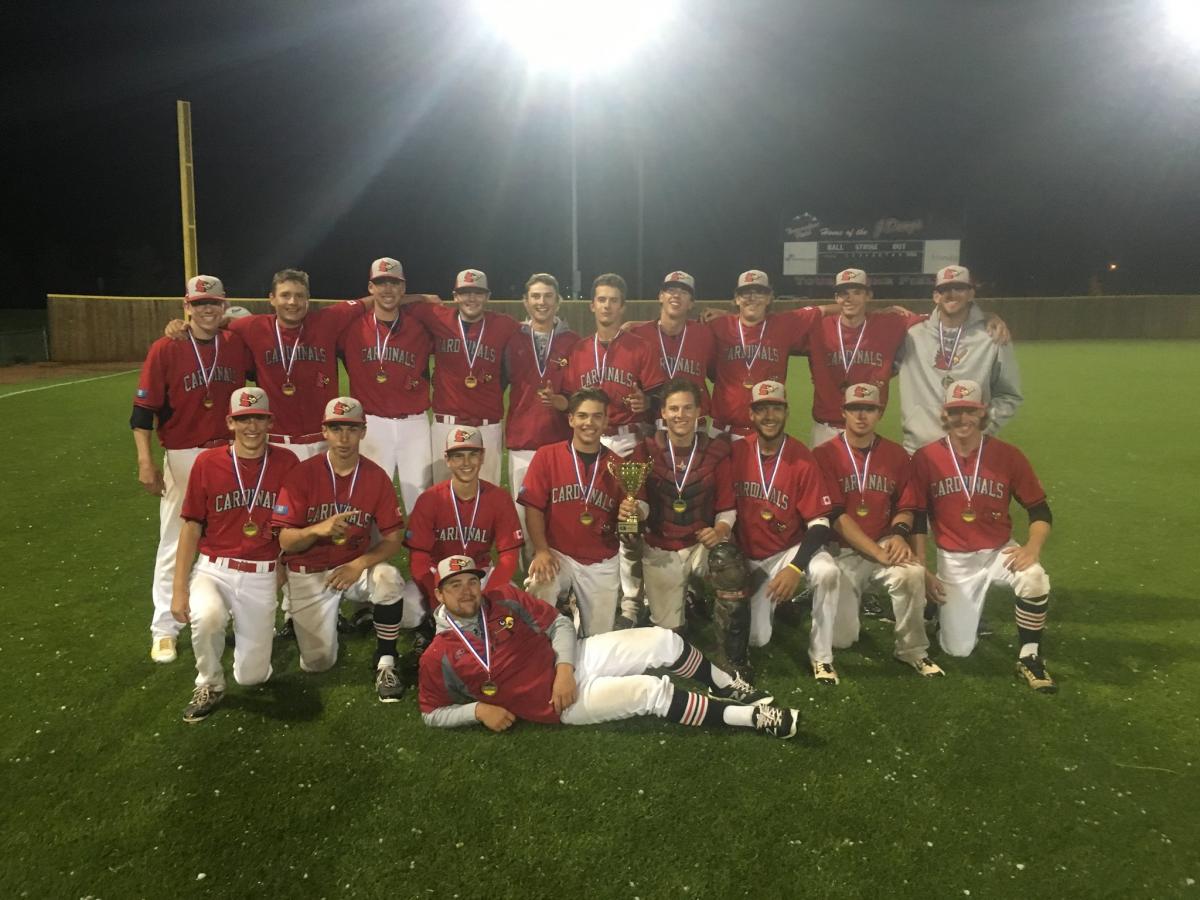