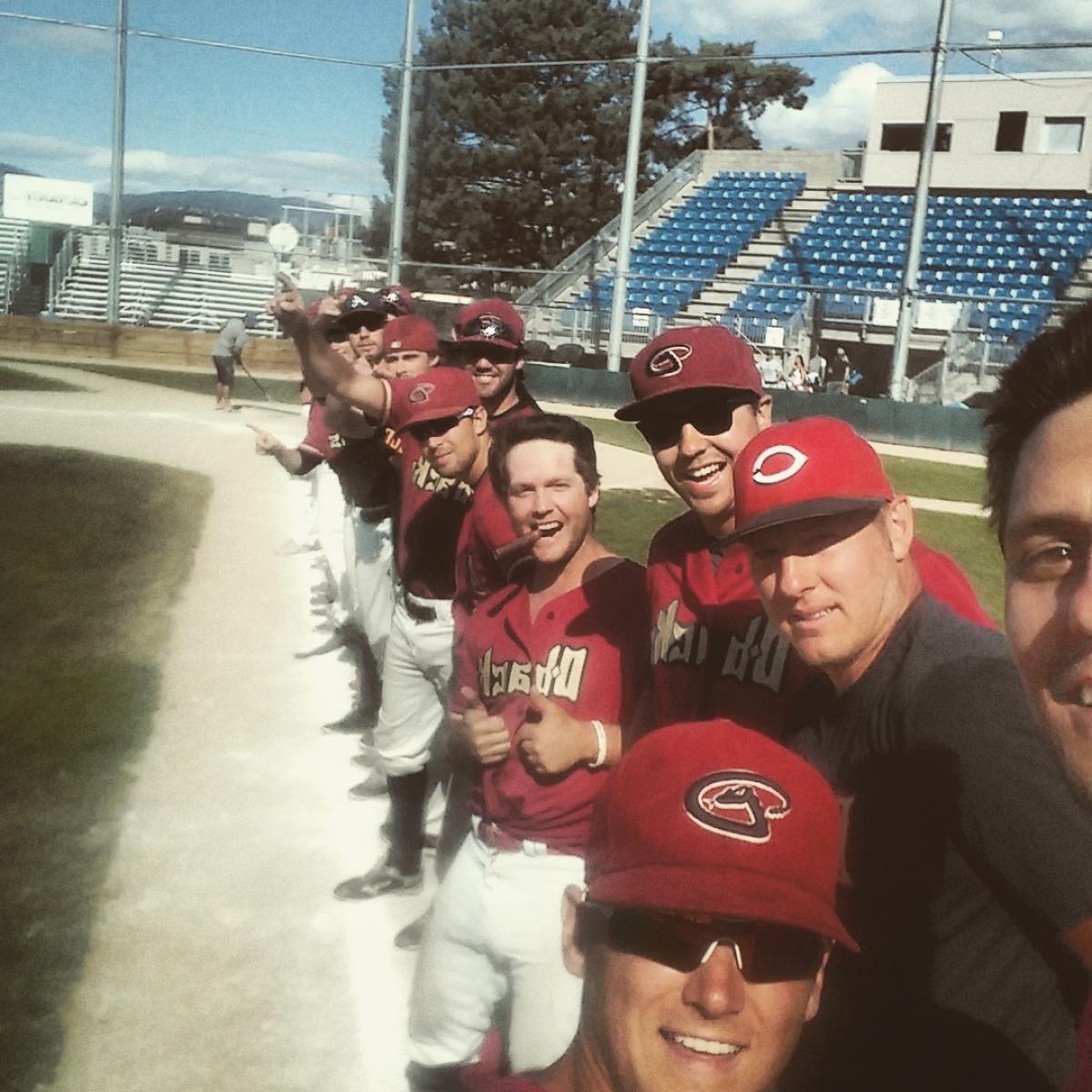 The Back-packs pulled together an impressive squad for the Canada Day long weekend in Kelowna. Players were sent by the Cardinals, Dukes, Wolfpack and Diamondbacks creating an outfield known as “Shark Week”, an infield which turned double plays into butter and a pitching staff that used 4 pitchers over 5 games – 3 of which went to extra innings and as a whole went undefeated 5-0.

The real story should be how the team closed down Kelowna every night along the way and still shoved – but that footage was viewed once and destroyed – let’s get back to baseball.

Game 1 vs "The Kids” Okanagan A’s
Suffering a meltdown 2 years prior in the semi-finals against the A’s – this match up held some significance and it started off a little shaky with a few bleeders landing for hits and some unorthodox bounces out of the infield putting the team down 2 – 0. Chico bailed everyone out the second inning with cat-like reflexes making a beautiful diving play to his backhand, Regher followed it up the next half with a base clearing double to put the DBacks up 3 – 2. Team didn’t look back after that. Final 8 – 2 Gayef with the CG Win.

Worthy Mention: Medical Student Miles’s Mother congratulated him on his win via text after the game: “Must feel good to win again” - Thanks mom.

Game 2 vs Coquitlam Angles
suffering defeat from the Angles last year in the RR, game 2 gave us other chance for redemption. Joe Sergent was so confident (Read: Hung-Over) about this game he literally parked his car and walked straight onto the mound to start the game (No Joke). Obviously the baseball gods did not like this and forced extra innings to decide a victor. Tied 4-4, “Not the Harmful Shark” Gerwing issued a walk off base hit to send the BackPacks 2 – 0 in the tourney. Final 5 – 4 Sergent with the CG Win.

Game 3 vs Kelowna Jays
The final game of the round robin saw the BackPacks take on the Host team, Jays. Curtis Smith took the hill and could secure a semi-finals appearance with a win. Backpacks took a 0 – 3 deficit (as usual) early. The hammerhead shark in center field, Ba-Lak-E Carruthers blasted a huge shot over left center to bring the backpacks within 1. Matt Zanutto and Justin Bryant joined the team from Grand Forks earlier that day and looked exceptionally good. This game would need extras once again setting the stage for a pinch-hit walk off sac-fly to end the game by Chico.  Gooooooooooooooooooooooooood. Final 7 – 6 Smitty with the CG Win.

Worthy Mention: Kenton "Scorebook Guy" Haugrud was tossed by the base ump for questioning a questionable call at first base. Shortly after Kenton "Shirtless Guy In the Stands" Haugrud almost got tossed again for re-iterating "Scorebook guys" comments.

Game 4 vs Kelowna Jays
Semi-finals would be a rematch vs the Kelowna Jays. Earlier that day a fortune cookie was opened which read: “You can’t go wong with Jordan”. This gave helpful insight to management who decided to start Jordan Wong. Jordan would absolutely deal over 5 innings and would be gifted 8 runs from the offence. Jamie Mitchel finally got adjust to the sub 90mph speeds and chipped in with a few doubles as well. Finished the game in 5 Innings 8 – 1 Mercy. Jordan Wong with the CG Win.

Game 5 vs Nanaimo Mavericks
With a quick turnaround and limited arms Jordan Wong rolled over like a cheap $17 hooker and started the finals. Providing a solid 4 innings of work leaving with 5-4 lead. The pitcher from Nanaimo had a "Gayef Like" explossion after being pulled, throwing everything in sight (glove, chair, waterbottle) across the dugout.Armstrong led the way on offence going 4 – 5. Hornstra and Mitchel were not far off.  Gayef came in to shut the door for the last 3 innings but decided at the last minute he wanted 2 wins on the tournament.  The score would be tied in the 7th 5 – 5 pushing another 2 innings of extras where the BackPacks Solidified their crown as Kelowna Champs. 8 – 5 Final. Gayef with the Win.