Tigers shutout White Rock to nab their
first win, drop back half of their first
double-header at Winskill

Saturday June 19th
After a rough season opener in White Rock on Wednesday night, the Tigers were determined to
regroup and deliver a much better effort at their home field in Tsawwassen on Saturday. They’d hand
the ball to Taylor Pearce for game #1. Taylor battled his control a little bit in the early going, walking a batter in each of his first two
innings of work. White Rock threatened to take the lead in the top of the 2nd , when a one-out walk
advanced all the way to third on a bunt that wasn’t fielded cleanly. The kid from Vancouver made up for it on the next play, fielding a groundball
for the out at one while preventing the runner at third from coming home. Pearce took care of the rest
on the mound, catching the Tritons’ #9 hitter looking to successfully pitch out of a jam. From there he
only allowed a single baserunner over the next three innings, leaving the game after five complete,
racking up 10 strikeouts and only needing 70 pitches in a dominant performance.
The Tigers struggled with the bats in their first game, but given how their pitchers were cruising,
the hope was it wouldn’t take too much to win this one. They loaded the bases with two outs in the 1 st
with a hit-by-pitch and a pair of walks, unfortunately unable to come up with a timely hit to get on the
board. Then with two out in the 3rd , MacDonald reached on an error by the Tritons’ third baseman and
quickly stole second. Fuoco was engaged in a hard-fought battle at the plate against Tritons’ starter Ben
McKinnon, fouling off four straight pitches from the hard-throwing right hander in the at-bat. Sadly it
was all for naught, as MacDonald was caught on the basepaths, picked off at second by the
Tritons’ catcher and tagged out trying to slide into third. They were FINALLY able to break through in the
4th however, and in true Tigers’ fashion at that, with the ole suicide squeeze play. Fuoco led off the
inning since he never got the chance to complete his last plate appearance, driving a double into the
left-centre gap, on which the Tritons’ centre fielder made a fine effort but couldn’t quite come up with
the catch. Smyan Billing was due next, who was moved up to the clean-up spot after a solid first couple
AB’s in the seven hole on Wednesday night. He laid down a textbook sacrifice bunt to move pinch-
runner Jake Fehr over to third, setting the table for the man of the hour, Taylor Pearce. He executed the
second successful bunt of the inning, cashing in the Tigers’ first run of the season, even reaching base in
the process because nobody was covering first on the play! It’s also worth
noting that despite MacDonald’s earlier mistake on the bases, he stole three bags in the game, including
two in the 6th that made the second squeeze play possible. That’s all the offense the Tigers would need
in this one – credit Finley McConnell with the save, he was stellar on the mound in relief of Pearce,
retiring all six Triton batters he faced to secure the first win of the season for his team.

Saturday June 19th
The Tigers’ aimed to keep the good vibes rolling into game #2, with aspirations of taking a 2-1
lead in the 8-game series against White Rock. They were starting to look like they had found their
groove in the 1st , loading the bases with nobody out and Billing coming to the dish. He lined one into
centre field that brought two runs home and gave the Tigers an early advantage, and they were looking
for more with two runners on and still nobody out. Those runners would be left stranded however, as
they couldn’t come up with another hit in the inning to really set the house on fire. White Rock got
those two runs back against Tigers starter Sawyer Shears, who managed to get through the first two
innings unscathed but had to be removed from the game after walking the first two batters in the 3rd.
Sam Grad took over on the bump and induced three straight groundouts, although
both of the prior walks came around to score in the process. The Tigers would reclaim their lead in the
bottom half, Billing coming through once again with another RBI single, this time to right field and
cashing in pinch-runner Tyler Olfert. That would be the extent of the Tigers’ offense in this contest, and
the Tritons weren’t about to go down quietly.
Grad got the first two batters to ground out in the top of the 4th, then a walk and three straight
singles scored a pair for the Tritons, giving them their first lead of the game. The go-ahead run came
home on a hard-hit comebacker that clanked off Grad’s glove, an unfortunate play as shortstop
McConnell was in position to field it for the final out had it cleanly evaded the tall right-hander. Grad
would rebound with a 1-2-3 inning in the 5th , departing the game at that point with his team still within
striking distance. McConnell came in to pitch the 6th for the second straight game, hoping to shut down
the Tritons’ bats just as he did in his first appearance. It was a much different story this time around
though, as he was working from behind for the majority of the inning and ended up surrendering five
runs (4 unearned) that put this one out of reach. Tigers rookie Jake Fehr came in to pitch the 7th, retiring the Tritons in order in his first league appearance. The boys from Delta would end up splitting their first double-header of the young
season and falling to 1-2. They will try to even the series at two wins apiece when they host White Rock
again on Tuesday night at Winskill, where they’ll continue to look for more offensive contributions up
and down their lineup.

Development Corner
Over on the other diamond at Winskill, the Tigers Development team was taking on Whalley
Grey, who handed them a crushing 12-1 loss in their first meeting Thursday night in Whalley. The first game of Saturday’s double-header
resulted in an 8-1 defeat, but the young Tigers group fought hard in the back half and were inches away
from earning their first win. Down by two in the bottom of the 7 th , cleanup hitter Brayden Abenojar
hammered a ball to the left-field fence that brought home Owen MaCool from third to make it a one-
run game. On that same play, one of the Development squad’s five seventh graders Jimmy Mellios was

hustling to try to score the tying run all the way from first, but Whalley executed a perfect relay to tag
him out at the plate, ending the game in a heartbreaking 4-3 defeat. Progress is steadily being made,
and hopefully it won’t be long til the young Tigers notch one in the win column. They’re also back at it
on Tuesday night at Winskill for their fourth match-up in their 8-game series with Whalley Grey.

The Tigers have been waiting far too long to finally make their official Premier Baseball League debut, and thank goodness Mother Nature cooperated, as it was a dream night for baseball in White Rock. The boys from Delta were set to kick off a series of 8-straight games against the Tritons over the next two weeks. The Tritons came out firing on all cylinders and the Tigers couldn’t match their intensity level, falling 8-0 in their season opener.

Ezra Murti got the start for the Tigers and was the biggest bright spot on a night that the Tigers didn’t do much right. He worked ahead of the Tritons’ hitters all throughout his three innings of work, firing nearly 80% first-pitch strikes, striking out 5 and only walking 1. Finley McConnell and Aksel Van Tol combined to record the final nine outs of the game, but the pitching staff didn’t get much help from the defence behind them. The Tigers had never been challenged in the field in exhibition play as much as they were by the Tritons’ hitters on Wednesday night, and it showed, as they committed four errors that led to five unearned runs. Errors aside, the Tritons still swung the bats very well, pounding out 12 hits against Tigers’ pitchers, including three for extra bases.

Offensively, the Tigers just couldn’t get anything going against any of the four different pitchers the Tritons threw out there. #2 through #4 hitters McConnell, Macin MacDonald and Dryden Fuoco accounted for the majority of what the Tigers could muster, reaching base five times in their nine total plate appearances, and one of those outs was a very deep flyball to centre off the bat of the veteran MacDonald. The rest of the team was 2-for-15 at the plate, the other two hits coming from rookies Smyan Billing and Sawyer Shears. Billing ripped a single up the middle with one out in the second and Sawyer Shears lashed a line drive to right field for a one-out single in the third. Unfortunately, both Billing and Shears were cut down trying to steal soon afterwards by Tritons’ catcher Vasya Seymour, who looked very solid behind the dish and is poised to keep the Tigers’ running game in check for the duration of the 8-game series.

Overall, the Tigers’ hitters struck out 14 times and need to be much more prepared for battle when they meet White Rock again for their home opener this Saturday at Winskill Park. Thursday night will be the Tigers’ Development team’s first game of their abbreviated 2021 season, as they begin an 8-game series in Whalley against their Grey development team. They will also renew their series Saturday at Winskill at the same time as the Prep team, so it will be a busy day at the ballpark!

by Dave Empey with

Developing Pitchers is loaded with pitching wisdom, including a ton of tips from this trio of major leaguers.  You'll learn more than pitchers in college or pro baseball.  Plus entertaining stories and anecdotes.

VOLUME ONE--12 Killer Keys for Velocity.  Adding anywhere from 3 to 8 mph and more.

VOLUME THREE--Command and the Mystery of Movement.  Throwing strikes, sink and run

For all Delta players, at any level, the cost is only $15.

Order with an e-transfer at RBC online to daveempey@shaw.ca.  Or by PayPal.

Then send Dave your email address and Developing Pitchers will be yours. 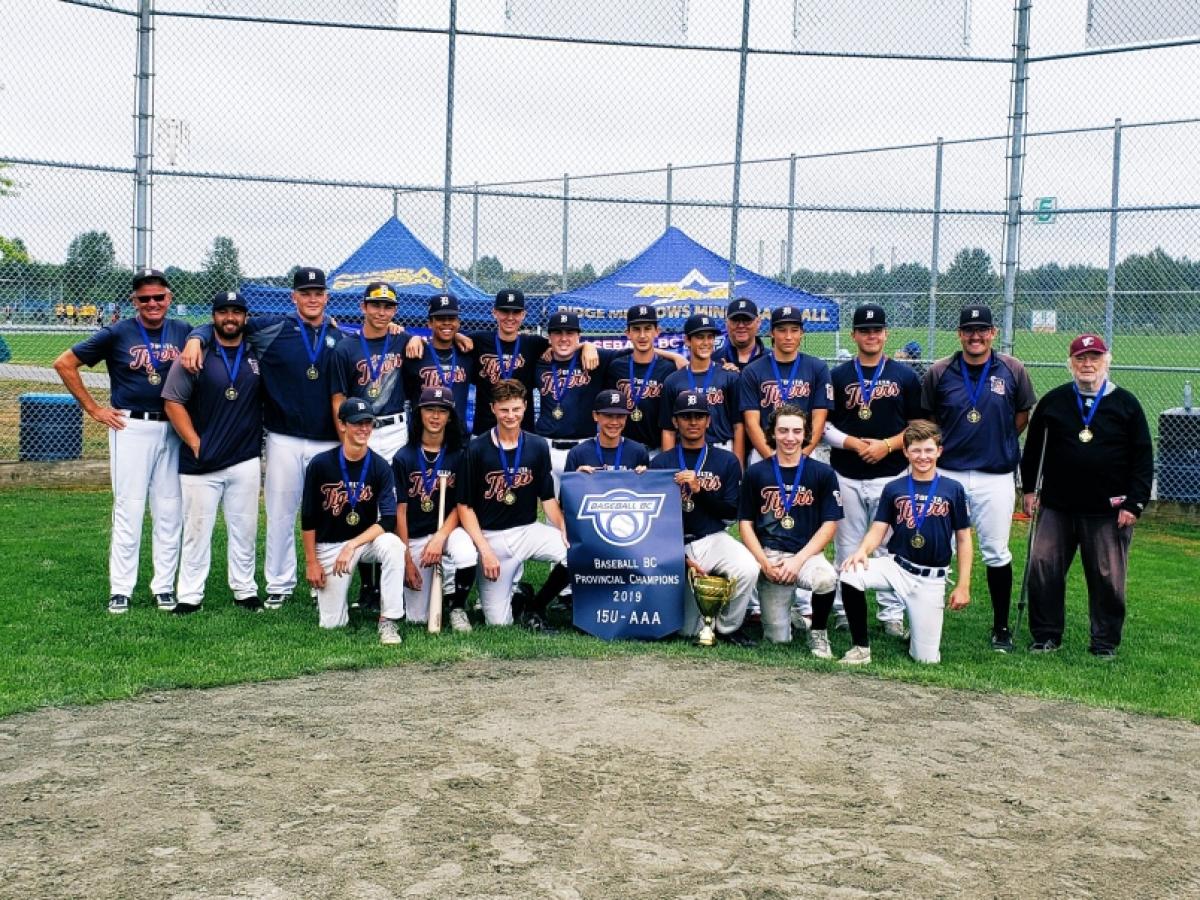 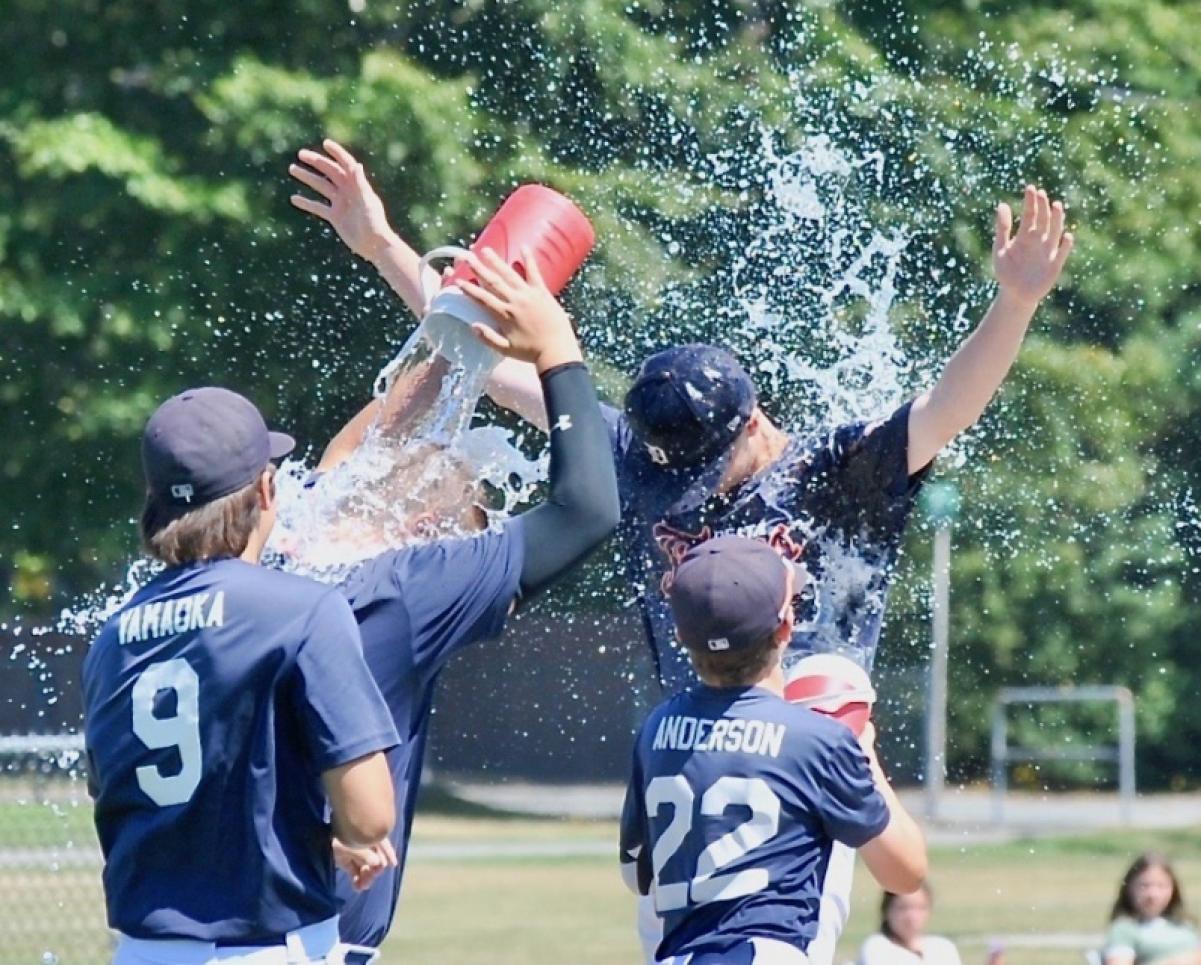 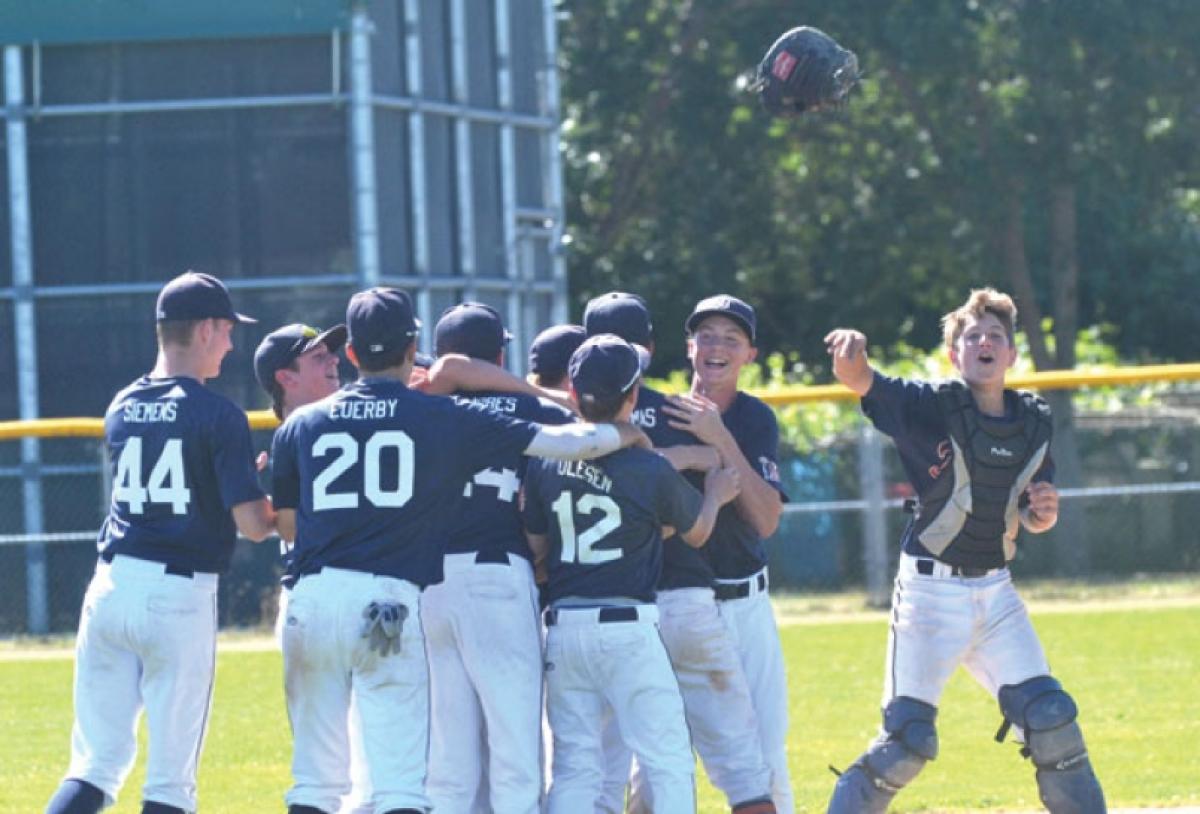 Tigers Repeat at BC Champs 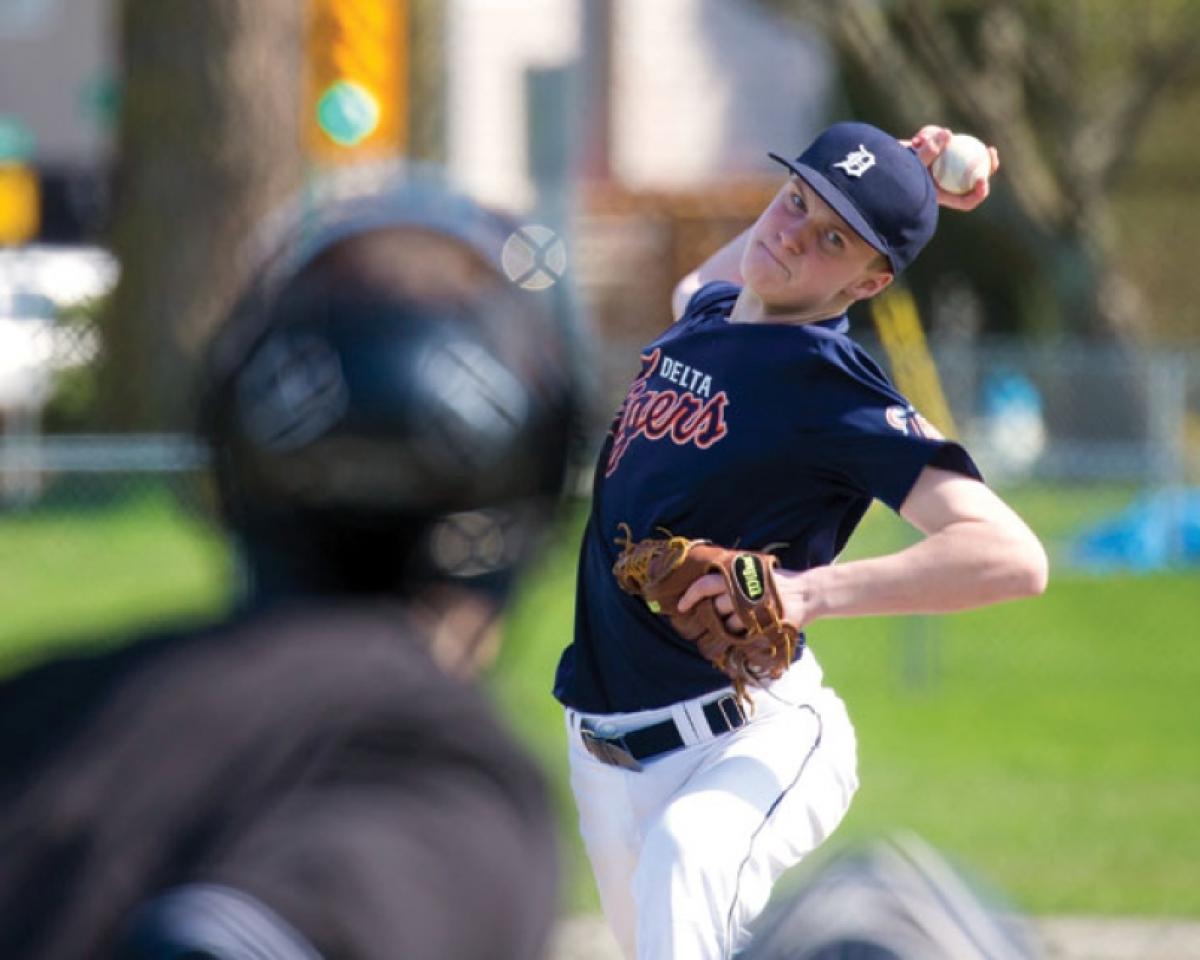