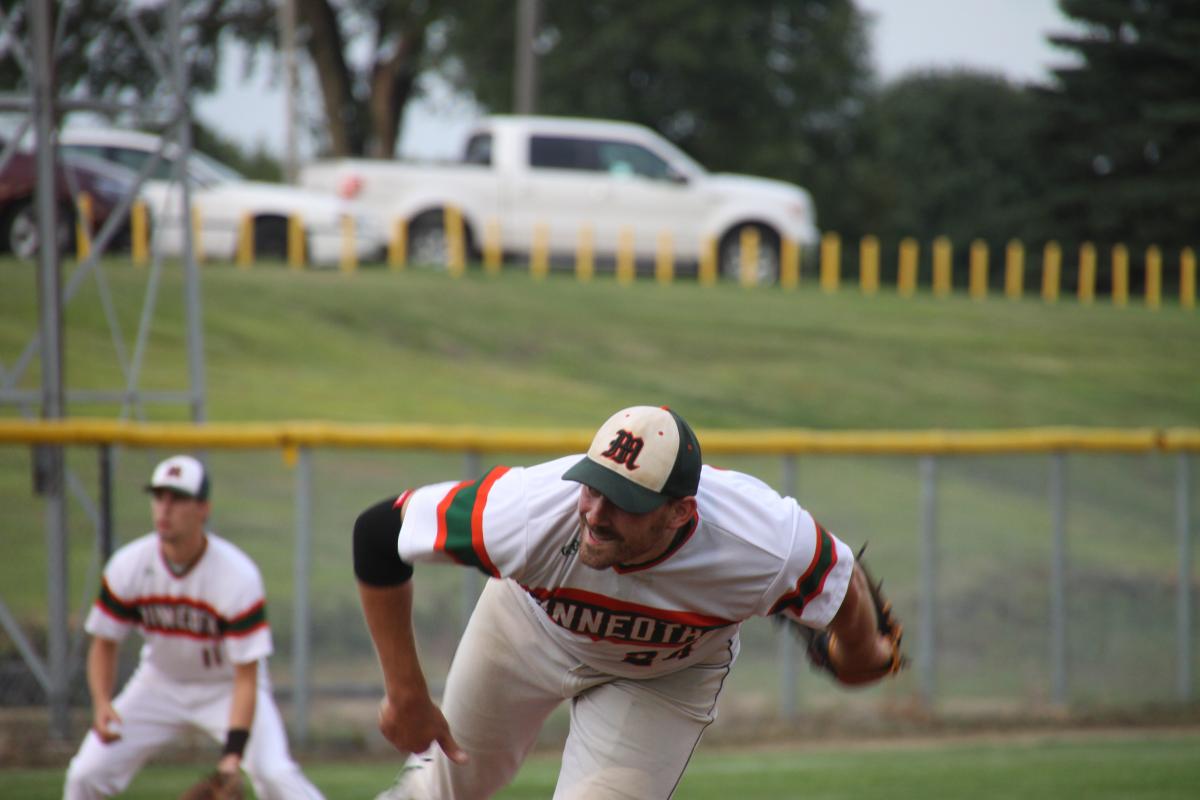 The Morris Eagles put a kink in Minneota's drive for a berth in the state tournament when they beat the Mudhens, 7-2 on Friday in Dawson.

The Dumont Saints beat Chokio Friday night in Madison to advance in the winners bracket.

The Saints won the thriller in the bottom of the ninth. Two runners ere on and the Saints got a a walk-off hit by Paul Zach to win it.

As a result, Dumont and Morris advance as the two undefeated teams.

Minneota drops into the losers bracket and will play at 1 p.m. on Sunday in Rosen against Clinton, an 8-3 winner over Cottonwood.

The Section 9C Tournament this weekend will be played in Rosen. Here's the lineup:

From the start the Morris Eagles proved they weren't in awe of Minneota "ace" Danny Hennen or his 10-1 season record.

In the first three innings they pounded out eight hits and scored five runs to take a 5-0 lead with their "ace", Jake Torgerson on the mound.

The hit that set the tone of the game was a two-run home run by Ryan Beyer in the first inning, following a booming double to the wall by Kirby Marquart.

"They hit the ball — they're a good team," said Minneota Manager Tyson Sonnenburg.

Minneota, on the other had was having trouble connecting for hits. In fact, when the game ended, three Mudens had all eight hits. Sonnenburg had three and scored both Minneota runs while Austin Buysse also connected for three hits and Preston Nuy, who went 2-4, knocked in Sonnenburg twice.

Meanwhile, Torgerson fanned six batters, five in the final three innings, including the side in the ninth.

"We have to try something," Manager Sonnenburg said when he replaced Hennen with Zach Nuy in the sixth inning.

Nuy pitched very well, striking out seven while allowing just two hits. But in the eighth, after a Sean Amundson double, it appeared Minneota had him hung up between third and home — but the ball came loose and Drager, while he got it in time, interfered with the runner and the run was allowed to scored.

"It was interference, I had no choice," Drager said later.

Yet, Nuy pitched a strong game in relief.

"They hit everything hard in the gap," said Manager Minneota Sonnenburg.

He felt it may have been different if the two teams would have played last Sunday instead of getting rained out. "They would have had to pitch their second or third pitcher and not their ace," he felt.

Minneota is still alive in the double elimination tournament and will play Clinton or Cottonwood at 1 p.m. Sunday in Rosen.