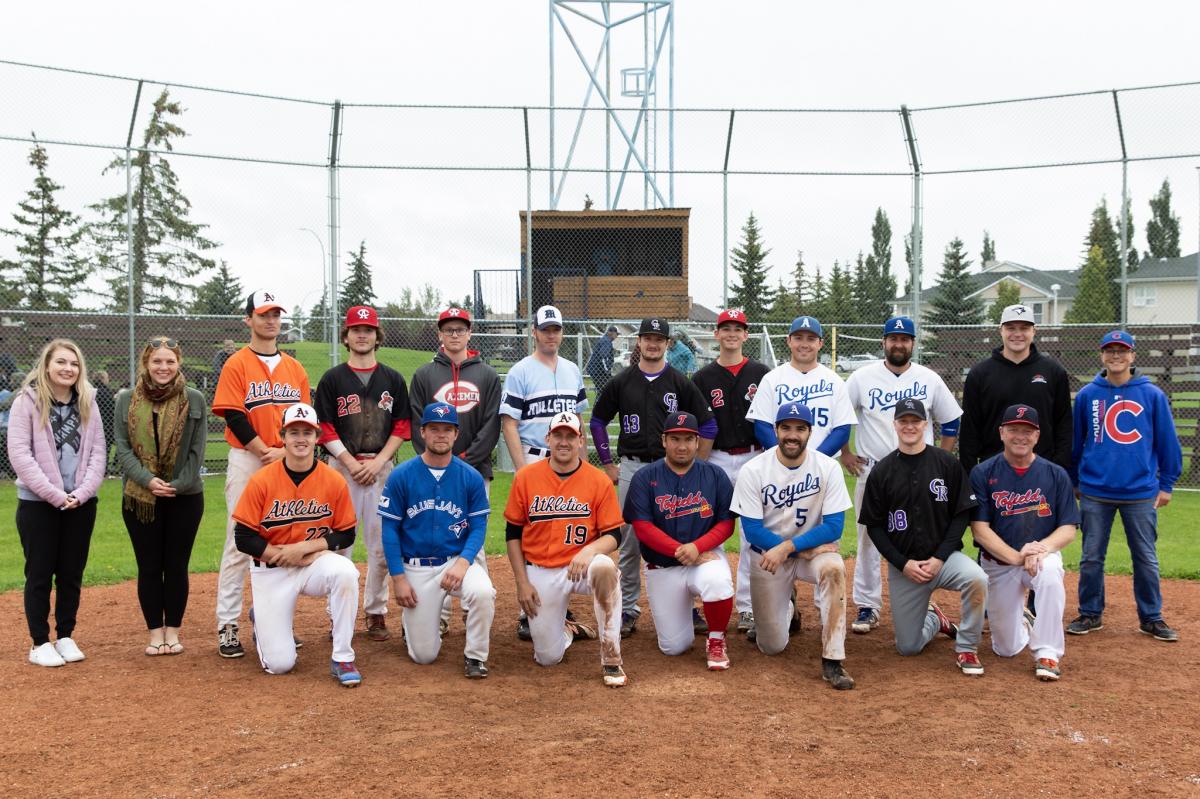 The 2019 edition of the Harry Andreassen All Star Game was played under heavy clouds and scattered showers on Sunday afternoon, with the Battle River Baseball League taking the game by a score of 10-8 over the Powerline Baseball League. This was the 19th annual game between the two leagues since 2000 and the win by the BRBL trims the PBL lead all time to 10-7-2.

The BRBL were first on the board with a RBI single with two outs from 3B Damon Zimmer of the Battle River Rivals to score Amisk Astros RF Brady Johnson. The BRBL would get three runners on base in the first inning against Camrose Axemen P Zach Bailey but C Sheldon Pederson of the Rosalind Athletics would throw out Damon Zimmer at second to end the inning.

Starting 2B Chase Leslie from the Rosalind Athletics led off the game for the PBL by reaching first base on an error to the BRBL left fielder and a wild pitch later would move into scoring position. Roadrunners CF Cal Zimmer worked a walk from BRBL starting pitcher Zeke Leuck putting the first two hitters on base. After a fielder’s choice off the bat of Royals 1B Luke Ryan, the PBL would pull off a double steal with one out as Leslie would score and Ryan would move into second

A lead off double from Veteran Bulls CF Colton Kitt would eventually lead the BRBL to a 2-1 lead against Bailey and the PBL in the top of the second inning. Killam Braves C Jordy Mandell would reach on an error to Luke Ryan at first base but would be eliminated on a fielders choice. Kitt would come around to score on the error. BRBL P Zeke Leuck would be thrown out at third for the second runner caught stealing by Pederson of the game.

For the second inning in a row the BRBL would see their lead off hitter reach base and come around to score. Provost Pilots LF Brett Schmidt would earn a lead off walk and move into scoring position on a single to right field by Killam Braves SS Dean Brody. Axemen P Zach Bailey would make a nice diving catch on an attempted sacrifice bunt from Amisk Astros RF Brady Johnson for the first out of the inning. A fielder’s choice off the bat of Battle River Rival’s 2B Eric Zimmer would give the PBL two outs, however the BRBL now had runners on the corners. The BRBL would get their own double steal as Zimmer would break for second while Schmidt would come home for the easy stolen base of home and move the BRBL lead to 3-1.

A one out error by Killam Braves SS Dean Brody with one out would set up Areman Royals 1B Luke Ryan the opportunity to tie the game with one swing of the bat and the power hitter did not disappoint. After Roadrunners CF Cal Zimmer reached on a throwing error, Ryan would send a Zeke Lueck fastball on a rope over the left field fence to tie the game at three. Leuck would retire ten of twelve PBL hitters at one point, but the two who would reach would end up tying the game.

The BRBL bats were quiet in the top of the fourth inning against new PBL P Ray Lehman of the Tofield Braves. Lehman took the mound after spending the first three innings at third base. A Zeke Leuck single to the left side of the field was the only base runner to reach base against Lehman in his first inning of work.

While Lehman kept the BRBL off the scoreboard, the PBL hitters would take the lead in the bottom of the fourth. Leduc Milleteers RF Adam Pahl and Axemen 3B Zach Bailey would each work two out walks from Leuck. After a wild pitch and a passed ball, the top of the PBL order would come up big with a RBI single from Rosalind Athletics 2B Chase Leslie and Roadrunners CF Cal Zimmer to make it 5-3 PBL.

Another lead off BRBL hitter would reach base as Killam Braves Landon Ekstra would hit a single to left field off of Lehman in his second inning of work. After getting Schmidt looking for the first out, Lehman would surrender a two run home run into the right field pond off the bat of Braves SS Dean Brody. With the game now tied once again, and once again as the result of a two run home run, the PBL would run themselves out of the home half of the inning by getting picked off, twice, by Rivals P Damon Zimmer. After back to back walks to lead off the inning, Zimmer would pick off Sheldon Peterson trying to get to third base after a short lived run down. Zimmer would then balk, allowing Axemen SS Grayden Guntrip to move to second base, before proceeding to pick off Guntrip on a daylight play with SS Dean Brody. All of a sudden two runners on with no outs was bases empty with two outs and a huge swing of momentum for the BRBL.

Young Rosalind Athletics P Carter McDonald had a touch game on the mound right for the start of his two innings of work. Veteran Bulls Colten Kitt would strike out shining to start the inning, but would each first base on a wild pitch for that third strike. McDonald would then issue back to back walks to Braves C Jordy Mandell and Bulls P Zeke Leuck to load the bases. The BRBL would take a 7-5 lead on a bases loaded double from Amisk Astros 1B Brandon Anholt that would evade Axemen RF Matt Andreassen. Leuck would come in to score the third run of the inning on a wild pitch before Anholt would come home on the BRBL’s second double steal of the game. Just like that it was 9-5 BRBL despite McDonald striking out three hitters and getting a weak pop up in foul territory for four outs in the inning.

Battle River Rivals P Damon Zimmer would get Rosalind Athletics Carter McDonald, Tofield Braves 2B Shaye Yoder and Armena Royals 3B David Ritz in order in a great shut down inning to get his offence back on the field.

Control issues once again plagued McDonald and the BRBL capitalized on them. With two outs, the BRBL would load the bases with back to back to back walks wth Veteran Bulls CF Colten Kitt scoring the tenth run of the game for the BRBL on a wild pitch. McDonald however would finish his second inning of work with a total of five strikeouts of BRBL in the six outs he would record, but the six walks issued were too much to overcome for the PBL.

Axemen RF Matt Andreassen, grandson of Harry Andreassen, would start the inning off for the PBL with a single into left field and would reach second base on an error to the middle infield of the BRBL who failed to remain on the base in a force play. A lucky break for the PBL to start an inning off where they needed to start chipping away to climb back into the game. However new BRBL P Jordy Mandell would get Royals 1B Luke Ryan to pop up to the first baseman and then pick up an out when Roadrunners C Colton Craig would line out to short for a big second out. The third out would be taken care of by Mandell himself when he would snag a comebacker off the bat of Axemen SS Grayden Guntrip to end the threat and the inning.

Next out of the pen for the PBL was Armena Royals Ian Sherbaniuk. Despite allowing a lead off walk, and another stolen base, and seeing the second hitter of the inning reach on a throwing error by Axemen SS Grayden Guntrip, Sherbaniuk would settle things down getting the next three hitters in order by not allowing a ball out of the infield. Infact, over the last two innings of the game, in which Sherbaniuk would pitch, the player/manager of the PBL All Stars would record six outs all in the infield to give the PBL a chance at climbing back into the game.

The PBL would get to BRBL P Jordy Mandell of the Killam Braves in the bottom of the eighth inning. With two quick outs, Tofield Braves 2B Shaye Yoder took a walk, Royals P Ian Sherbaniuk ripped a single into left field. Mandell would load the bases by walking 3B Matt Andreassen of the Axemen before issuing back to back bases loaded walks to Roadrunners CF Cal Zimmer and Royals 1B Luke Ryan. Andreassen would come in to score the third run of the inning on a wild pitch to close the book on Mandell’s night. Veteran Bulls P Colten Kitt would be summoned to close out the game with the PBL now with the tying run in scoring position. Kitt would get Roadrunners C Colton Craig to pop up to first base after the left handed hitting Craig took quality hacks at the dish.

Sherbaniuk would close out the game for the PBL on the mound allowing only a walk and keeping the game to a two run lead for the BRBL. In the home half with the PBL fans looking for a big comeback by their all stars, the PBL offence would fizzle out. Grayden Guntrip would hit a line drive to third base for out one ahead of Holden Blue Jays LF Randall Ziegler reach base to bring the tying run up to bat. Back to back fielder’s choices would end the game as the third and final out of the game was recorded on a 4-6 force out by the BRBL middle infield.

For his work on the mound for the BRBL and at the plate, Veteran Bulls starting pitcher (and then eventual catcher) Zeke Leuck would be named the game’s most valuable player. Leuck would receive the Doug Wolbeck Memorial Award for his effort as the third recipient of the award since it was first award in 2017. The BRBL All Stars would gather around home plate and received the Harry Andreassen All Star Challenge trophy presented by members of the Andreassen family.

The win by the BRBL moves the all time series to 10-7-2 in favour of the Powerline Baseball League.

On behalf of the teams, players and fans, I would like to thank Powerline Baseball League President Brett Keohane for all the hard work and organization that it takes to get this game going every year. This was Brett’s third and final year in his term as the PBL President and has set a terrific precedent for the continuation of the annual Harry Andreassen All Star Challenge. Another two individuals who need recognition are the umpiring crew of Doug Bowie and Peter Rogers. Both gentlemen have been involved with the Powerline Baseball League and the Battle River Baseball League for as long as most of us can remember, and seeing them giving their time at an event like this means a lot to everyone involved. Thanks fellas!

Next up for the Powerline Baseball League will be the yet to be announced Fall Meeting. This meeting is scheduled for sometime in September where teams will meet to discuss the 2019 season as well as finalize the League Executive as the league searches for a Vice President and Treasurer. Stephen Hrabec of the Holden Blue Jays will begin his three year term as the PBL President. 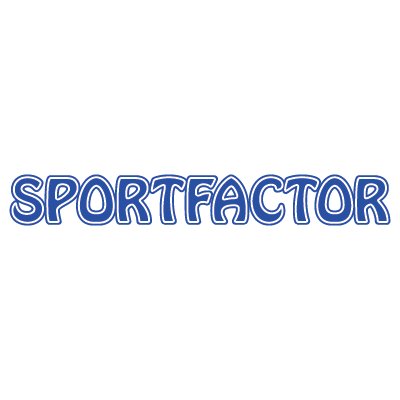 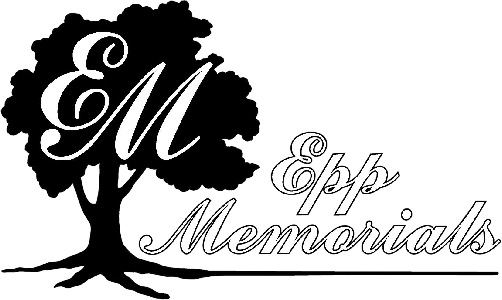 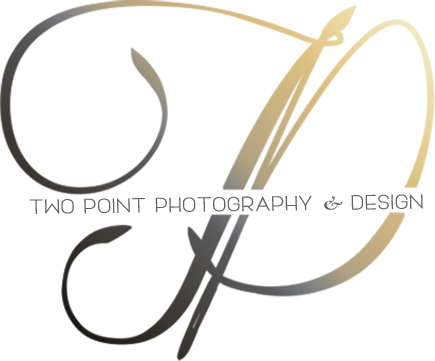 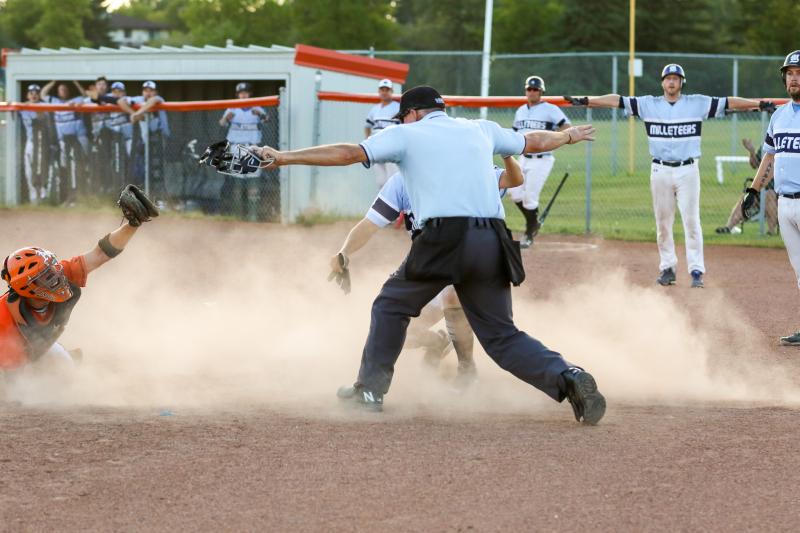 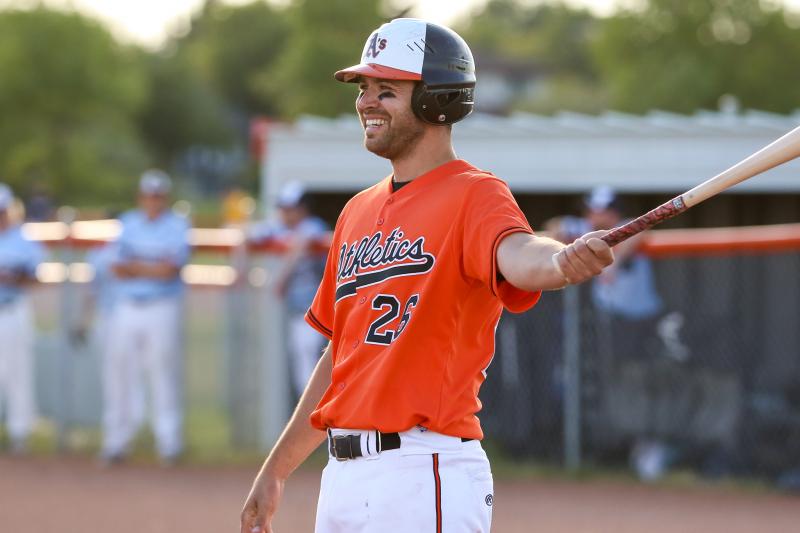 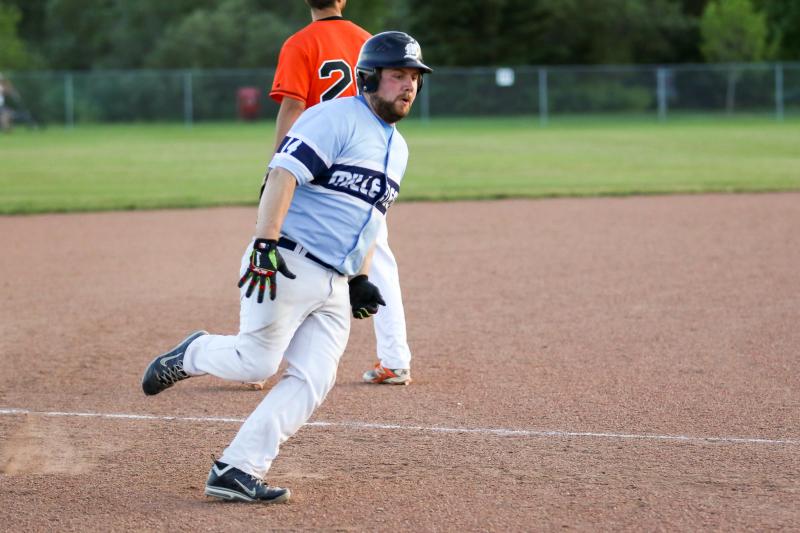 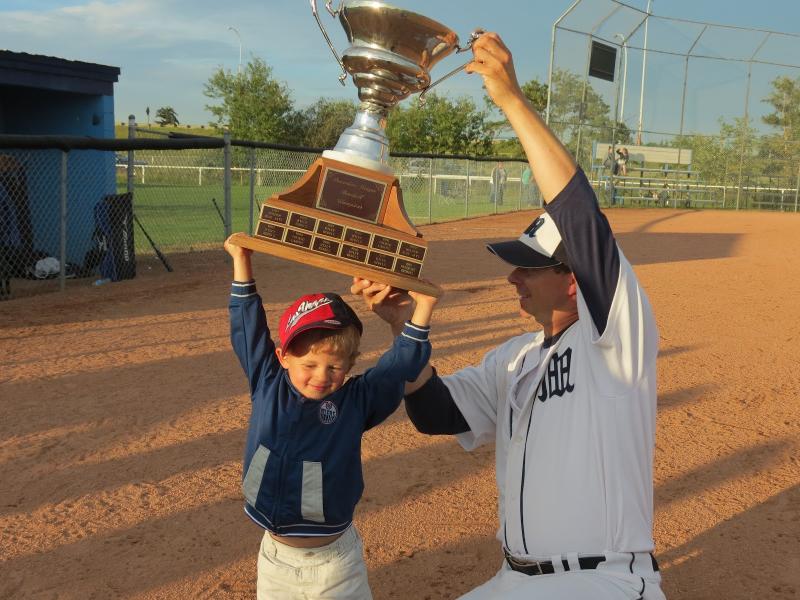 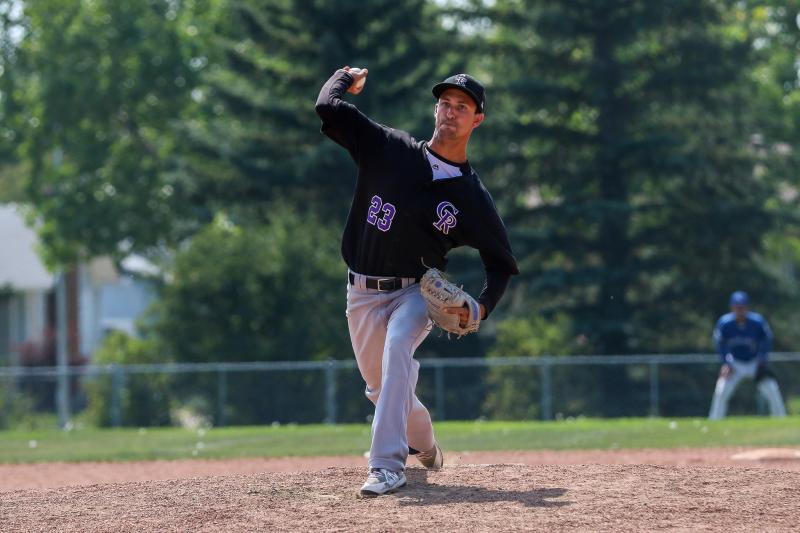 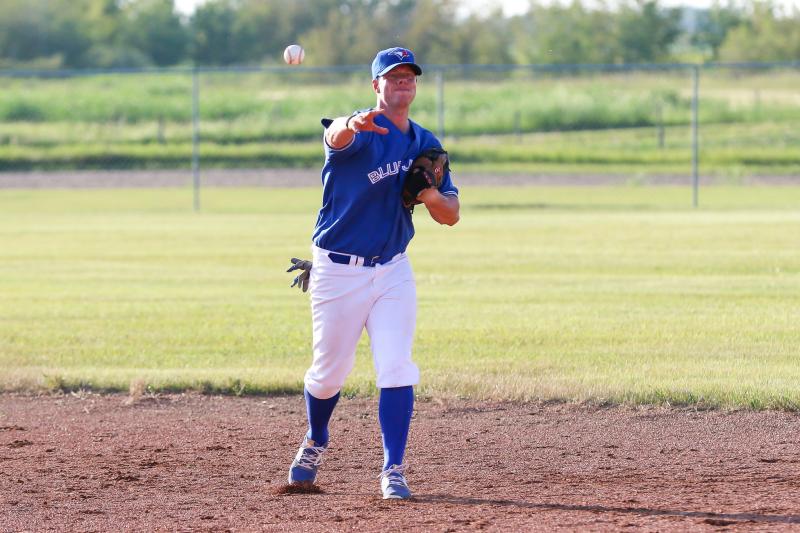 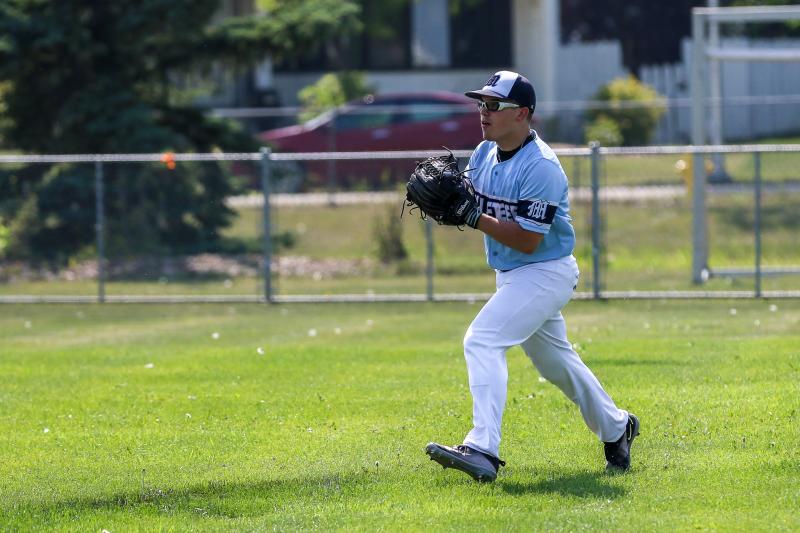 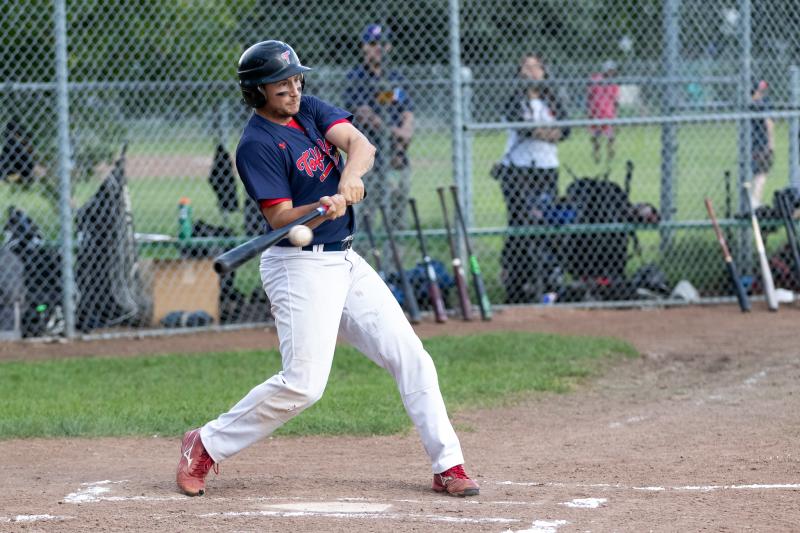 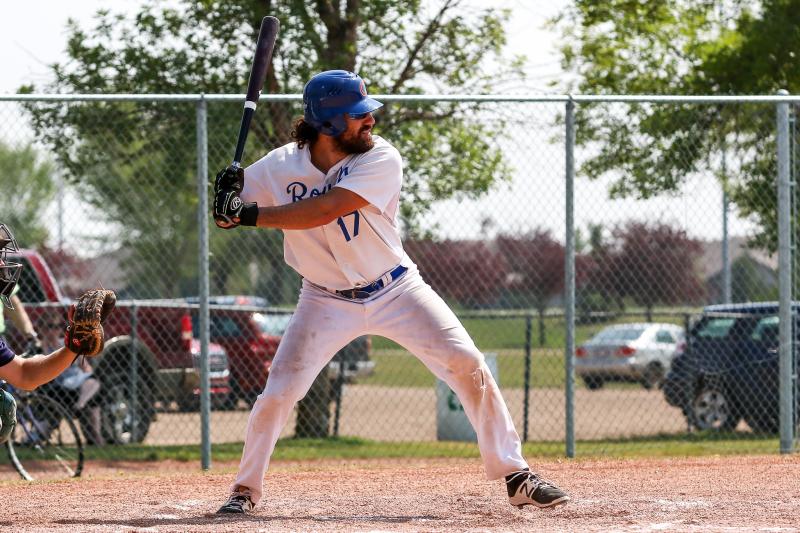 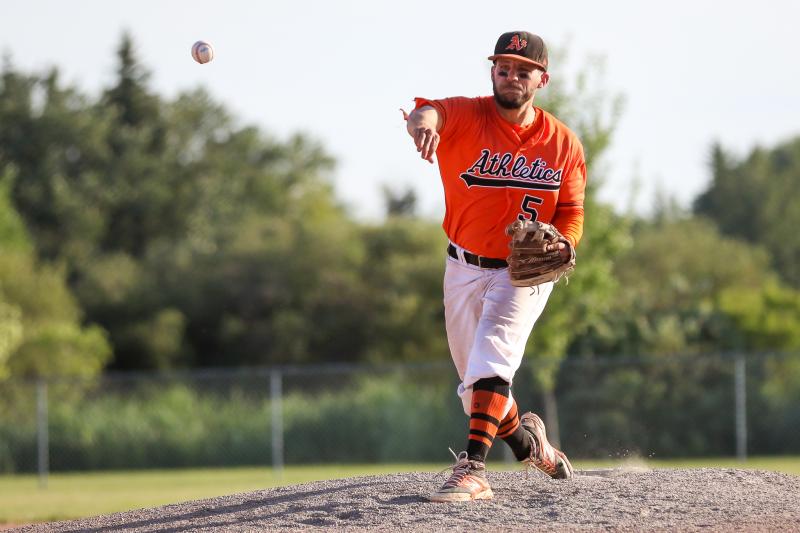