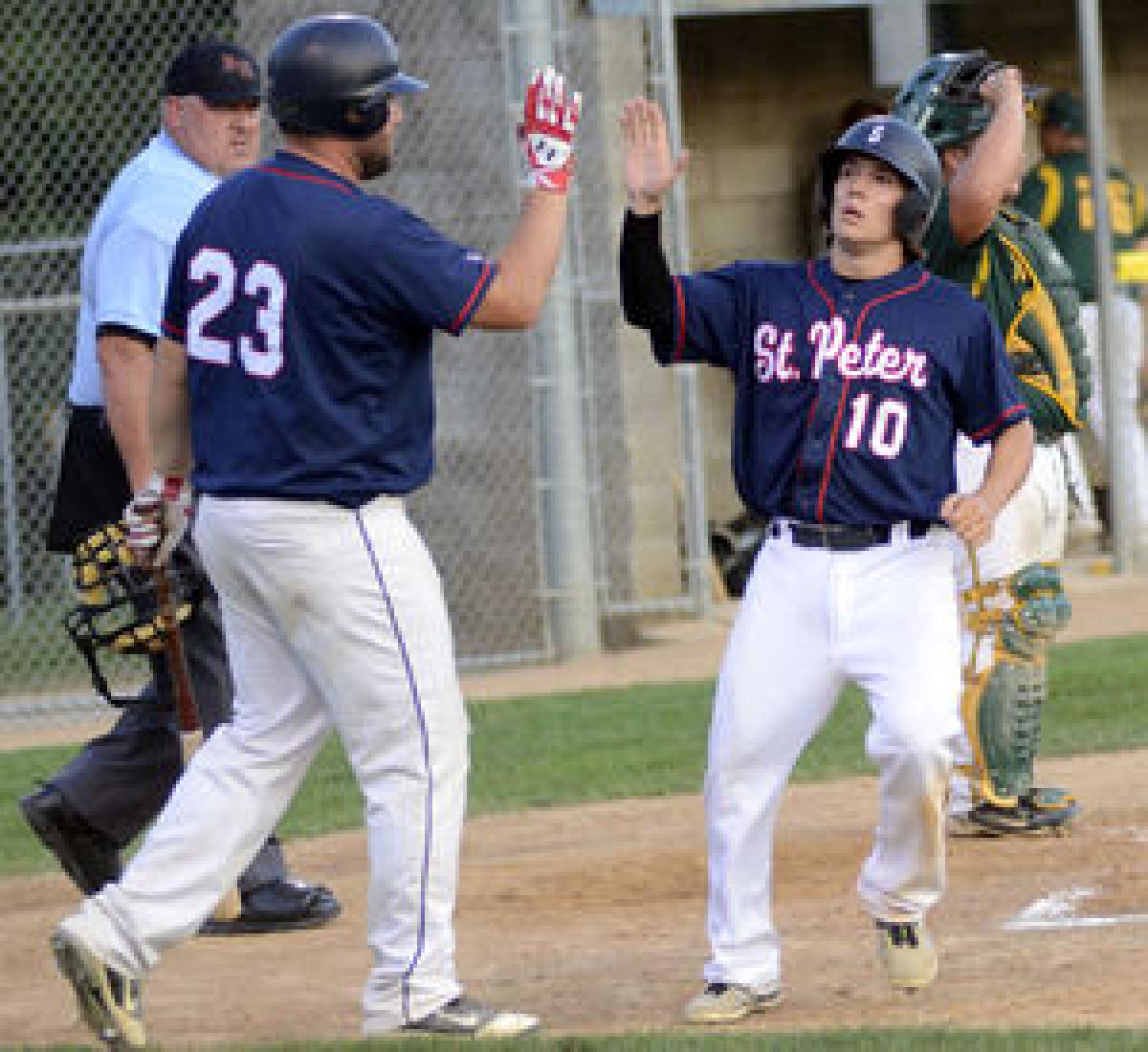 Getting their clutch hitting back on track, the St. Peter Saints defeated New Ulm Kaiserhoff 5-1 on Wednesday night in a elimination game of the Region 6C amateur baseball playoffs at Veterans Field.

With the win, the Saints advance to a state-qualifying game at 7:30 p.m. Friday versus Gaylord at Veterans Field. Gaylord edged Arlington 5-4 in the other elimination game.

In the second-round 3-2 loss to Belle Plaine on Sunday, most of the Saints, except Jayme Munsterman who drove in both runs, failed to deliver hits with runners on base.

But they broke through big time in the seventh inning against New Ulm with four runs on three hits, a walk and a hit by pitch to take a 5-1 lead.

Munsterman delivered again against New Ulm starting a rally in the third inning and driving in a run in the big seventh inning.

"The pitchers are throwing me good pitches that I like to hit, and it just worked out for the best," Munsterman said.

"We had a lot better approaches at the plate tonight than on Sunday. We were seeing more pitches and hitting our pitches more than hitting the pitchers' pitches. Everyone was trying to do too much, instead of thinking easy."

The Saints tied it 1-1 in the third inning. With two outs, Munsterman singled to left and stole second base. Ryan Kapser hit a bloop single to center to drive in Munsterman.

After three scoreless innings, St. Peter erupted for four runs in the seventh, again with two outs. Pinch hitter Jordan Wilmes took the first pitch for the team in the back to reach first. Center fielder Sam Wenner walked, and Munsterman delivered an RBI single to center to drive in Wilmes. Then Kapser singled to center to score Sam Wenner. Kapser went to second on the throw home. Shea Roehrkasse hit a two-RBI single to center to plate Munterman and Kapser for the final score of 5-1.

St. Peter pitcher Jesse Anderson went the distance, including retiring 20 straight batters from the second to the ninth innings. He threw a five hitter with eight strikeouts and one walk for his second straight playoff win.

"Our pitching was phenomenal," Munsterman said. "Jesse did great and pitched pitchers' pitches, and they couldn't hit him tonight. He was hitting his spots well. And he was having a good mix between his cure ball and his fast ball, which was throwing them off."

St. Peter fielding also was flawless again with no errors.

Munsterman, who lives in St. Peter next to Mankato, just graduated from Mankato West High School and will be attending Gustavus Adolphus College in the fall and play baseball for the Gusties.

"I'm going to hopefully play some baseball and get a good education first," Munsterman said.