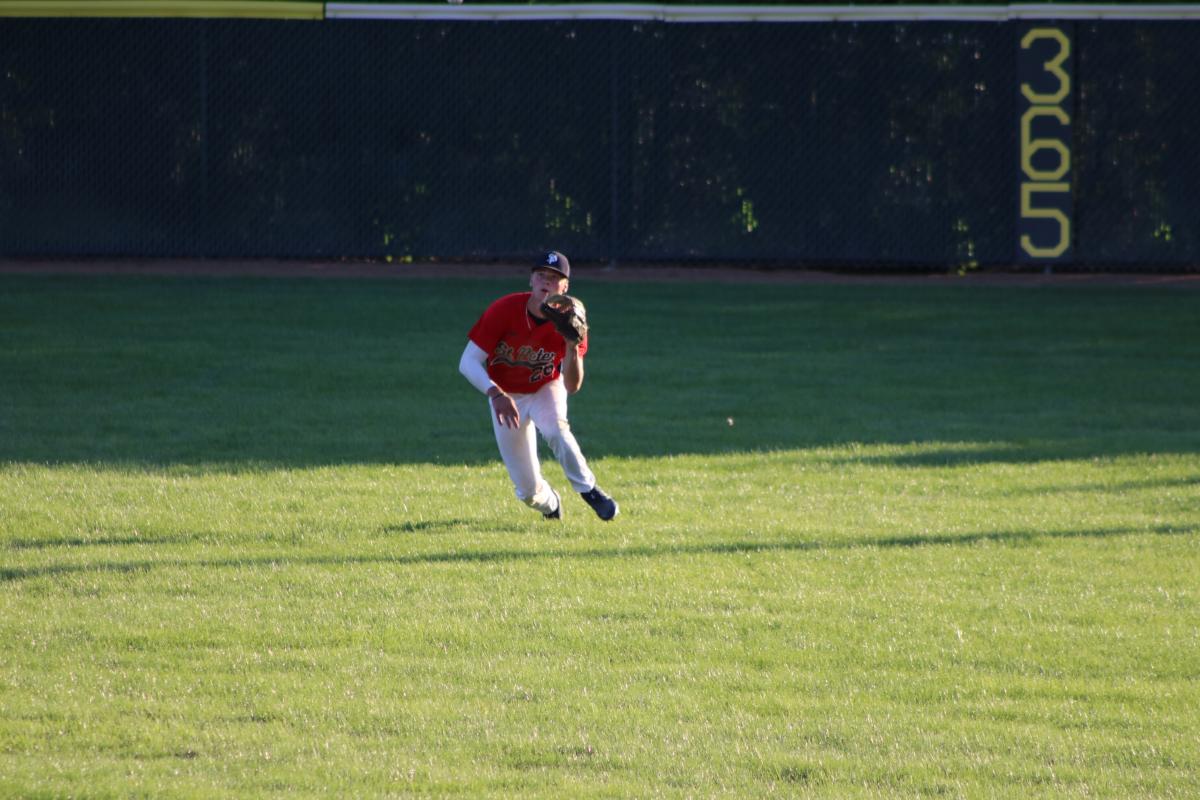 The St. Peter town team played three home games at Veterans Field over the weekend and won all three to jump into first place in the River Valley League. The Saints swept Henderson by scores of 5-2 Friday and 9-4 Saturday, and then earned a series split with Gaylord by winning 7-6 Sunday. The local nine is now 6-1 in the RVL with five games left before region playoffs.

After two scoreless innings, the Saints took a 2-0 lead in the third as Sam Wenner led off with a single, stole second, and scored on a triple by Brad Morris. Morris then scored on a sac fly by Jovan Rodriguez.

Henderson responded with a pair of runs to tie the game in the fifth on two singles and a walk, but the Saints came back with what proved to be the game-winning run in the bottom half. Wenner walked and later scored on a passed ball. The local nine then added two insurance runs in the eighth as Rodriguez and Billy Hanson both walked and scored on RBIs from Jeff Menk and Chet Olsen.

Owen Little tossed a complete-game three-hitter to earn his second win of the season. He struck out nine and walked nine batters as well. Menk led at the plate, batting 2-for-4 with an RBI.

The Saints scored the game’s first run in the third after Rodriguez singled and scored on a base-hit by Hanson. The Tigers answered with four runs in the bottom half on three hits, a hit-by-pitch, and an error.

In the sixth inning, the Saints cut the Tiger lead to two as Hanson led off with a double, advanced to third on a sac bunt by CJ Siewert, and scored on a groundout by Menk. STP then exploded for four runs in the seventh on four hits. The Saints added three insurance runs in the ninth on three singles and a couple errors.

In his first start of the season, Kevin Sandborg tossed all nine to earn the win. He allowed two earned runs on four hits with five strikeouts and zero walks. Olsen led the Saints at the plate, batting 4-for-5 with an RBI. The team collected 16 hits.

The Islanders got off to a fast start with two runs in the first inning. The Saints answered with one run in the bottom half as Wenner led off with a double, advanced to third on a sac bunt by Hanson, and scored on a groundout by Rodriguez.

STP rallied for four runs and a 5-2 lead in the second. Austin Pinke led off the frame by reaching on an error and advanced to third on a sac bunt by Menk. Olsen was beaned to put runners on the corners and Tyson Sowder ensued with an RBI single to score Pinke. Andy Regner followed with another single and Wenner plated two runs with a third-straight single. The fourth run of the frame came home on a sac fly by Rodriguez.

The Saints gained a 6-2 advantage in the fourth as Hanson walked, reached second on a wild pitch, and scored on a single by Rodriguez.

Gaylord started its comeback bid in the seventh with a pair of runs after two walks, a single, and an error, ending St. Peter starter Luke Regner’s day on the hill. Regner posted another quality start, allowing three earned runs on five hits over seven innings.

The Islanders were then able to tie the game in the eighth with a pair of runs off reliever Jeremy Braun. They took advantage of a single, walk, hit-by-pitch, and an error to make the score 6-6. But the Saints immediately answered in the bottom half as Sowder hit a one-out single, advanced to second on a hit-by-pitch to Wenner, went to third on an error, and scored on a bases-loaded infield single by Rodriguez.

Sam Carlson pitched the ninth, allowing two hits but struck out the final batter to earn the save.

Rodriguez led the team at the dish, batting 3-for-4 with four RBI and a sacrifice.