Cardinals Put Up 11 Runs for the 5th Time in as Many Games; West Coast Defeats Chilliwack 11-2 in Final Tuneup Before Pivotal 4-Game Weekend vs. Delta Orange 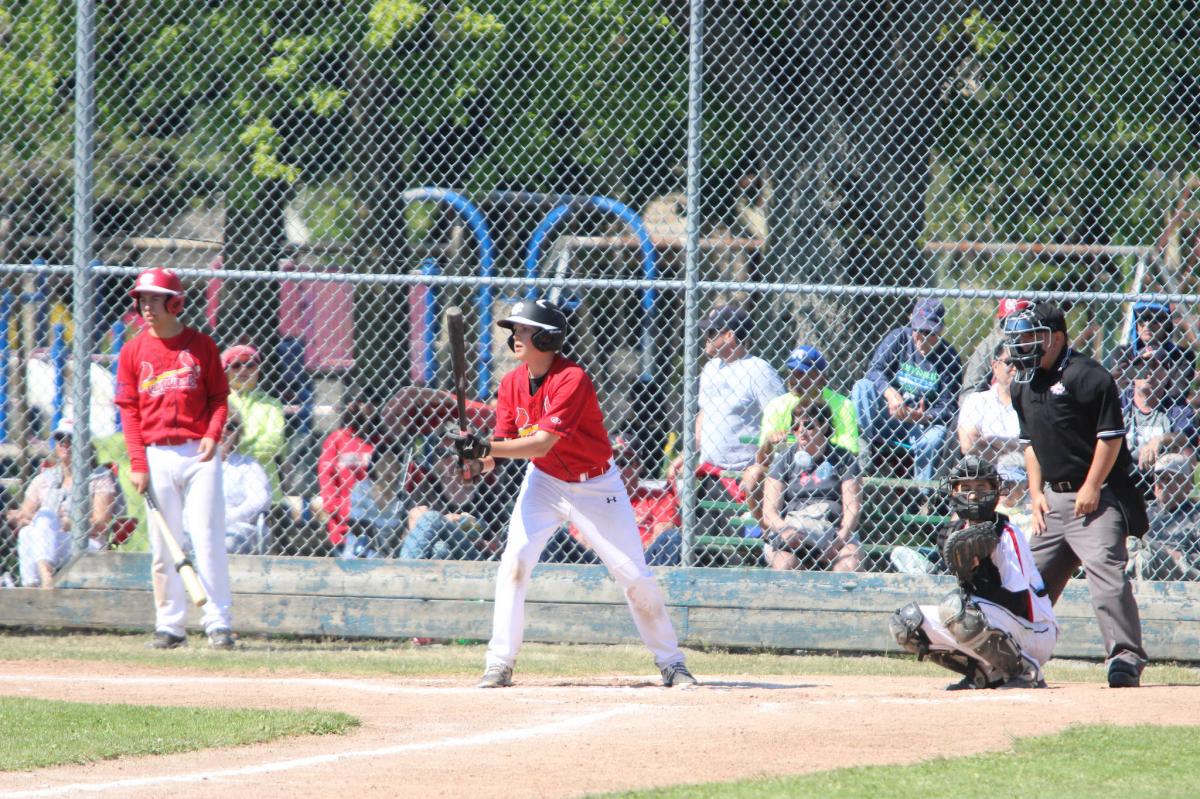 9 days removed from their last game as a team, the Cardinals were looking to win their 17th straight league game and keep pace with the now 20-0 Delta Orange Tigers.  There were a few headlines going into tonight’s contest vs. the provincial hosts, Chilliwack Cougars: Rogers was looking to get his pitching back on track, the tall 2021 grad from Coquitlam had struggled over a number of his past outings on the bump but was given the chance in this one vs. the lowly Cougars to right the ship. Lamourea was making his much anticipated return to the lineup, the former Fraser Valley little leaguer was making his first start in the lineup since an unfortunate ankle injury sidelined the first baseman for multiple weeks.

Rogers, a day after his 15th birthday got his 4th start of the year in this one and looked great in warmup but once again fought control issues from the first batter of the game. Lefty Jared Hall led off for the Cougars and despite an oppo shift on the potent left-handed bat of Hall, #12 from Chilliwack dropped one into shallow left field for the first hit and baserunner of the game. Back to back walks followed a strikeout and Rogers was quickly staring at working out of an early bases loaded 1 out jam with Leiper at the plate. Despite working the count back to 2-2 after falling behind 2-0, Rogers threw a belt-high fastball that Leiper knocked back up the middle scoring 2 and giving the Cougars a fast 2-0 start to this game.

The 6-10 Chilliwack Cougars sent 2022 grad southpaw Jared Hall (younger brother of both Jude and Ty Hall) to the mound. Hendriks wasted no time introducing himself to Hall as the first pitch was roped to left-centre for a leadoff single. Jordan Lennerton (Chilliwack’s head coach) seemed awfully concerned with Hendriks at 1st with a 2-nothing lead as 3 straight pickoffs subsequently followed up with a pitchout then an overthrown backdoor saw Hendriks move up to 2 on the error by the Chilliwack catcher. Before Hall could blink, the next hitter, his counter-part Rogers would pull the Cardinals within 1 with a solid base knock up the middle scoring Hendriks with ease. 2-1 Cougars after 1.

Rogers looked to have settled in after 1 as the often overlooked right-hander who has been stellar for West Coast at the plate this year (.506 AVG and .590 OBP coming into this game), simply a great kid and one that works harder than anyone at his craft sandwiched a weak groundout in between two strikeouts; the latter of the two strikeouts against his counterpart Jared Hall. Yuen got the offensive 2nd for the Cards started with a single down the 3rd base line and made his way around the basepaths on a pass ball eventually followed up by a steal of 3rd and scoring on a throwing error by the Chilliwack catcher. The Cardinals weren’t done there as their deep lineup continued to come through, a walk to Waters, Lamourea was then rudely welcomed back to the lineup as Hall beamed the lefty-stick in the elbow guard, Nagatomo was the walk to load the bases for Giesbrecht with 1 out.  Despite falling behind 1-2 in the count, the aforementioned Giesbrecht worked the count back to even before hitting a clean sacrifice fly to the Cougars’ left fielder scoring Waters standing up and giving West Coast a 3-2 lead after 2.

Rogers despite getting a quick foul out for the first out of the 3rd inning, walked back to back hitters and could only watch both of them advance 80’ thanks to a wild pitch. With 1 out and two runners in scoring position, the Cougars were ready to pounce on the opportunity with Leiper due up. Leiper already had 2 RBIs to his credit and was looking to double that total to 4 but Rogers would retire Leiper on strikes for a huge 2nd out then get second-year vet Rabinovitch swinging to end the threat, Rogers would let out a breath of fresh air as he slowly walked back to the Bird Field 3rd base dugout. In the bottom of the 3rd with 1 out, Tong would get fooled on Hall’s breaking ball but get just enough of it to pull it down the 3rd base line on what was a questionable fair/foul call by the home plate umpire, nevertheless Tong was standing on 2B with his 4th double of the year. The very next pitch saw Lefebvre hit a groundball to the Cougars’ third baseman, the throw across the diamond allowed Tong to race for 3rd and the throw back across the diamond from the Cougars’ first baseman wasn’t pretty as it sailed in between two blue jerseys into left field as Tong jogged home giving the Cardinals a 4-2 lead after 3.

With Rogers at an unsettling 60+ pitches after 3 innings, Yam sent the right-hander back to the mound to face the bottom of the Chilliwack order in what would be his last inning. #17 wearing the red button-up Cardinal jersey was up to the task as two strikeouts sandwiched a groundout once again capping off an outing that was not great but a step in the right direction for Marc-Olivier Rogers. Lennerton didn’t let the 13U Team BC National pickup from Chilliwack in Jared Hall advance past the 3rd inning as Lennerton brought on Dakota Janzen to start the 4th. Janzen would work around a walk to retire the Cardinal side and keep it a 2-run deficit for the Cougars after 4 innings of play.

McRae came out for the 5th inning, the young first-year southpaw from Coquitlam was also looking to rebound on the mound after back-to-back subpar outings. McRae looked good early as he got a favourable matchup to begin the 5th facing lefty-stick Hall who grounded out to Waters for the 1st out of the inning, a theme that prevailed throughout the top half of the 5th. Brand and Middlemiss also grounded out to Waters, the latter of the two groundouts was a short chopper down the 3rd base line that Waters gloved and threw on the run to nab Middlemiss off a cheap hit, a fine play indeed! Janzen continued to stymie the Cardinal bats as he retired the Cardinals top of the order in order keeping it 4-2 after 5 innings.

Evan McRae came out for the 6th inning and looked shaky hitting a batter then walking back-to-back hitters with 2 outs to load the bases and put the tying run in scoring position. With 2 outs and the bases loaded, Yam brought in the pitcher with the best strike to ball ratio of the team in Taiki Suzuki. Suzuki was fresh off being named to the roster on both the Zone 4 BC Summer Games team and 15U Team BC headed to Chicago, IL at the beginning of next month. Suzuki would retire the first batter he would face stranding the bases loaded.

With two stellar innings put up by reliever Dakota Janzen, Lennerton turned to Middlemiss to lock down the 6th. Middlemiss, who was also recently named to the Zone 3 Summer Games team and 15U Team BC was looking to hold down the 6th inning and keep his Cougars within striking distance. Waters would record his first hit of the night and it was a big one as the former South Van LL would drive one off the centre-field fence for a 2-run double. McRae with his only plate appearance would drive home the aforementioned Waters with an RBI single and later score on a groundball by Hendriks. Two more runs would plate on wild pitches and finally the 7th run of the inning capped off by Tong’s second hit of the game, an RBI single through the right-side of the infield scoring Rogers with ease making it 11 runs exactly for the Cards. That’s 5 straight games where West Coast has scored exactly 11 runs in their victories. The top of the 7th saw Suzuki retire his lefty-lefty matchup Hall via. a weak popup, #18 then gave way to #27 in Maunahan who despite walking two with two outs retired Leiper for the final out and ending this ballgame. 11-2 Cardinals. - LY

The red circles in the calendars are right around the corner and how could you not be excited for the much anticipated 4-game set between the 20-0 Tigers and 18-1 Cardinals. West Coast has won the only matchup between these two perennial powerhouse teams, you don’t have to look too far back as a Warkentin vs. Hendriks quarter-final matchup less than 3 weeks ago saw Hendriks dominate an offensively talented Tigers squad as Rogers and Tong (both snubbed from the 2 select teams) combined to provide the only offence that game, an exhilarating 1-0 quarterfinal win for the boys in red. The action gets underway at Cromie Park in Ladner this Saturday, noon start.