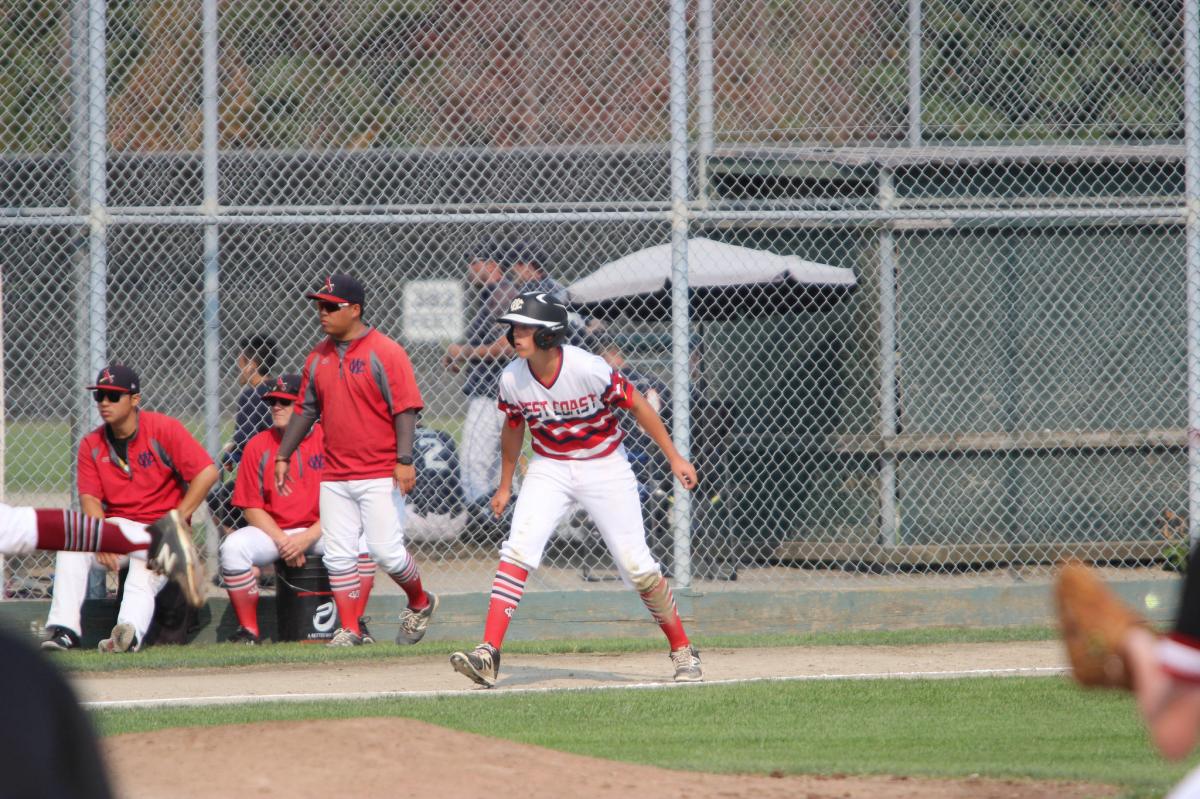 Due to some external influences, Henry Ahn will be taking over this post game write up. As the first and possibility only write up for the year, I would like to mention a disclaimer. In no way should anyone reading the following article take offense by the words written below. It is purely for enjoyment purposes.

A sunny Wednesday evening warmed the West Coast Cardinals and Chilliwack Cougars for the first of three straight head-to-head match ups between the two teams. As the West Coast Cardinals were fighting for a chance at first place, they took their opposition very seriously as the Chilliwack Cougars were likewise very heavily motivated just with other reasons.

Alex “Two Hands” Duncan-Wu would get the nod for the Cards and had a great day on the bump going four shutout innings before giving up one run and then taken off for relief. He would end up with a quality start and win (5 IP 1R 0ER 7H 1BB 3K).

In the first inning, Jake “Automatic” Giesbrecht was put to work as he was made busy having to pick up two ground balls and a pop fly for a strong defensive performance. In the bottom of the 1st, the Cards managed to load the bases with two outs but failed to convert.

Although the Cards managed to score two runs in the 2nd inning, its marginal success was overshadowed by Wiley “Always Geared up to Go” Waters unconventional highlight reel defensive play. The ball was softly nestled towards Waters which looked like a routine pop up. However, to absolutely demolish the expectations of the entire audience and especially the Chilliwack batter, Waters would let the ball drop in front of him, pick it up on the short hop, tag 2nd base and throw out the Chilliwack player who was on his way back to the dugout. It was not that the initial play by Waters was particularly exceptional or that Nicholas “The Thicc Stick Sparky” Lamourea would bail Waters’ off the mark throw by tagging the Chilliwack player. The play was a performance of sheer and utter brilliance by Waters as he displayed the skills of quickly assessing the situation and applying his knowledge of straight facts towards his defensive game to earn the 6U-3 Double Play.

On a side note, the West Coast Cardinals would never be caught in such a situation offensively as Hendriks and Rogers understand the threat of punishment of not running hard to first base regardless of where the ball is in play. One set of poles given as capital punishment would be the minimum punishment given to deter any likelihood of not giving 100% on the base paths and out of the box.

In the second inning, costly defensive mistakes by the Chilliwack infield would give up free base runners to eventually give the game’s opening run to Ryomaaaaaaaaaaaa “Kuma” Nagatomo for a 1-0 lead to West Coast Cardinals. There must have been severe changes in wind pressure as the Chilliwack 3rd Baseman and Shortstop failed to catch what looked to be two routine pop flies. The offense didn’t stop there as Jake “Here to Steal Your Girl” Giesbrecht would also score to bump up the score to 2-0.

With 1 out runners on first and second Chilliwack failed to convert.

And with two outs, Duncan-Wu picked up a three pitch strikeout looking to end the inning.

However, Chilliwack would end the inning off holding West Coast to a 4 pitch inning as Trevor “Ralph” Tong, Noah “I Got Great Flow, Coach” Lefebvre, and Wylie “Turtle” Waters would provide absolutely Z E R O offense in the bottom of the 3rd inning.

The top of the 4th would start with a costly error.

Luke Yam would call for a 3-2 fastball for Duncan-Wu to throw DTC (Down the Canister) foreshadowing a hit over the fence and "into the woods". 15U Coach of the Year. Fortunately, the Chilliwack batter did not take a sufficient amount of pre game workout energy supplement and would “only” manage to one hop it to the fence for a leadoff double.

Chilliwack's’ second batter would be walked and make it to third on a wild pitch setting up runners at 1st and 3rd with nobody out.

The next play would be Coach Ahn’s TSN Turning Point of the match.

A hit and run would ensue as a pop-up to shallow right field would be caught by Evan "Speedy" "Wheels" "BigMac" McRae as he fired the ball over to Lamourea at 1st to double up the Chilliwack baserunner who broke for 2nd. Soon after, Duncan-Wu would get a ground ball to escape the inning unscathed.

Special regards to Evan “LilMac” “Instagram Goalie Calibre” McRae as he showed Coach Ahn and the rest of the WCC the potential max speed he can produce from his legs.

In the next two offensive innings, the Cardinals would put Chilliwack to rest as they would score four more runs.

Matthew “Giggles” “Gold Glove” Maunahan would be the first run scored and on a first and third play, another quality Sac bunt by Jake “the Snake” “But Also Selfless” Giesbrecht would bring in WCC’s second run of the 4th inning.

Duncan-Wu, would help his own cause with an RBI single scoring Willem “I Love All People Equally” Heilker. A hit by pitch to Lamourea and walk McRae would load the bases.

With two outs, Tong would punch a ball to shallow left field where the Chilliwack Shortstop would make an lunging dive to rob Trevor “Ralph from UP, if it wasn’t made clear” Tong to hold the WCC at four runs. An unfortunate at-bat for Tong as his usual toothy grin was nowhere to be found and all that could be found from Tong’s face was of someone who had just drank a shot of despresso. Tong would go 0/2 with one walk before being subbed off by Max “Politest Kid I Know” Yuen. Over the past month and a half, Tong has been hitting a team leading .500 with an on base of over .600. I think you’re doing alright buddy, you’ll definitely bounce back for next game.

In the top of the 5th, with runners on first and third and two out, the Chilliwack batter would hit a weak ground ball straight to Cody “Heart of the Hide” Hendriks. However, Hendriks would make an unconventional error and short hop the throw to first which would give up a run to the Cougars who struggling to stay afloat against the riptides of offense the West Coast Cardinals are known for producing.

Leading off the 5th, looking for redemption, Cody “Clutchie Dutchie” Henriks would face a hard throwing reliever in Middlemiss to lead off the inning. Hendriks would soon rake a ball through the right side resulting in a C L E A N lead off base hit.

Waters not looking to be overshadowed would follow up with a pitch perfect golf swing hole in one smackerdoodle to right field.

With no out, the opportunity to score on a pass ball at home, would be missed by Hendriks who would subsequently smack his head in grievance of his mental error. Fortunately, Hendriks ended up scoring before the inning was up so his emotional outburst of utter frustration was soon relieved.

The next batter Willem “Oppo POWER”, Heilker would add to his already successful day of hitting with a line drive shot into left field, his 3rd hit in as many at-bats to load the bases.

Marc-Olivier “Always Woke” Rogers, fresh off the bench, would hit a chopper straight to the third baseman for a Fielder's choice but an RBI in the process.

With one out, Matthew “Probably Still Riding a High from Making the Arguably Most Important Catch of the Okotoks Tournament" Maunahan, would get caught stealing at home with the bases loaded, trying to score on a ball that ricocheted off the Bird Field backstop wood straight to the Chilliwack catcher. Oops!

Giesbrecht would be walked next pitch to load the bases yet again.

Taiki "Literally Ichiro" Suzuki would fight a high fastball and drive in a run with an RBI single. However, the substitute third base coach Greg “G” “Picking Machine Sr.” Miles filling in for "BC Minor's Favourite Coach" Lucas “Father of Four” Yam, while he was doing only God knows what, would send a rounding Heilker home only to end up getting gunned down by Chilliwack’s stud first year centre fielder in Jude Hall. Giesbrecht whom had made it to third on the contesting throw to home was especially in dismay to see Heilker not even be close to being safe. Formidable job Gregory.

The score was 6-1 Cards after 5 innings of play and Duncan-Wu would be relieved by McRae.

The most exciting play of the 6th would happen after another E5.

The first base coach from Chilliwack would miss an easy foul ground ball that bounced off his forearm. It was all a part of the process however as Rabinovitch would use the humour created by his dad in the first base coaching box and drive a single up the middle.

Soon after a wild pitch would give the Cougars runners on third and second. A ground ball out would bring a runner home for the first out and the second run of the day for the super Chill Cougs.

McRae would throw himself a flyout to shallow center field for the second out and get the third out by striking the pinch hitter King out looking showing that even the aforementioned royalty can be shut down by the common folk.

Maxwell Yuen would drive home the only run of the Cards' offensive 6th as Lamourea (who reached base on his 2nd hit by pitch, 3rd free pass of the night) scored off Yuen’s RBI single. Despite having two runners on and 2 outs, Matthew Maunahan never gave himself a chance as he took one small step backwards interfering with the Chilliwack catcher’s throw to 3rd as “Mr. Blue” called Maunahan out on the offensive interference. Have a day Matty Maunahan!

McRae came out for the 7th to face his lefty-lefty matchup only to fall behind 3-0 to Hall, McRae lost control of his 3-1 fastball and plunked his counterpart. Yam was already out to the mound before Hall could reach first base as he called on the offensive (interference) hero in Matthew Maunahan to finish off this ballgame. He would induce a pop up from Chilliwack’s 2-hitter, then catch Chilliwack’s 3-batter looking on strikes much to the hitter’s dismay of the called 3rd strike then induce a groundout 6-3 to end it. 7-2 Cards over the Cougs in this Wednesday night affair.

It wasn’t all fun and games as Hendriks, Yuen and Suzuki would take the time after all was said and done to acknowledge that this was their final game at Bird Field.